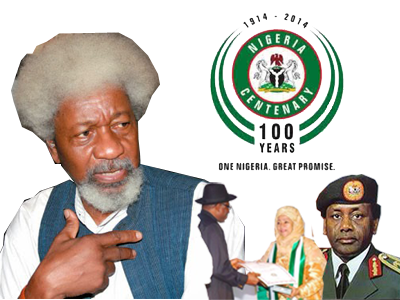 I read the outburst of Sadiq and Gumsu days ago and I shook my head in empathy because I know they don’t know or understand a minute of who their father was or what he did to Nigeria as a nation, probably too young to know. I am sure they must have heard of the phrase “Abacha Stove” before now, and if not I bet Sadiq did already by now. I also have some funny feeling he thinks it’s some sort of microwave oven that uses no electricity or kerosene to generate enough heat for cooking just about anything, and he’s probably thinking his father brought the genius in us out? It’s the other way round “spoil brat”, your dead dictator of a father brought the COWARD in us out, he brought so much fear on us that even today, the best we do is keyboard activism from the comfort of our air conditioned offices, while our nation rots away in the hands of fools (GEJ and your new uncles) that are so blind, that they see value in the decay and dearth your father brought upon Nigeria as a nation and a people. The truth is that we are still afraid and I am not afraid to admit it.
The man you now have the impudence  to refer to as an “ordinary writer” today is so far one of the very few great Nigerians that stood against your dead father even on death ground to defend this nation. We were all afraid, I was young but I was conscious of it, we all went around like dead bits, afraid to talk even in the safety of our rooms because no where felt safe enough but Wole Soyinka stood, he was the voice of the people but he had to flee at some point because of the magnanimity of your demonic father in giving death and pain to all. Today you write to defend him in a democracy won by the tears and blood of so many, the many that were killed by your father during his reign of terror and death. How I wish we could roll back the hands of time to your father’s days, maybe even as a son, you will find the strength  to write for or against your imbecile of a father.
Before I go on son, I will like to teach you how to make an “Abacha Stove” so you know how creative we got under your father. First you’ll have to find an empty Paint Can, then you make a tiny door at the base of the can, big enough for a single stick to go in. Simple you see, but that’s not all. Now you have to go to the sawmill to hustle for saw dust, haul it back home then you put a Fanta bottle or any other object that is smooth and cylindrical in shape, place it at the middle of the can and fill the can with saw dust. You must pound and stuff the can very well or else you’ll have to make another before a pot of beans is cooked enough for eating. Now you stuff the hole with anything flammable, insert a stick through the door at the base and light it up, your Abacha stove is ready to cook beans (beans was technically the only nutritious food the masses could afford during your fathers reign) has you swear and curse the dictator and his generations under your breathe every time get choked in the smoke or had to bend down on your knees to blow the ember of the stove with your mouth. I am sorry to inform you that you’ve inherited the heartfelt curses of millions of Nigerians, dead or alive. I hope you know the power of words, If I were you, I will await a leap year, go on a 366days of fasting, praying and alms giving, sleeping in dimly lighted rooms in order to liberate myself from the ripples of karma, nemesis and their close cousins instead of sitting down in a well lighted mansion, writing to a man that deserves to be honoured as a real Nigerian and not your father whose name should be erased from the history of Nigeria and probably be replaced with the exploit of Lisabi, or Gandoki if we have to stick with the north.

On that fateful day the news of your father’s death broke, I remember one event that forever changed my life. Saheed was a next door neighbour who had been bedridden for months by an ailment that seems to have no cure, he was pale and white like death itself but on that fateful, he came back to life. I was sitting on the pavement in front of my house when suddenly he emerged from the window of the room where he was confined screaming “Abacha ti ku! Abacha ti ku!!” (Abach is dead!). He scaled the window with accustomed ease and started jumping with so much vigor that made me doubt it was the same Saheed. In a split second, the homes were empty and the streets were flooded with people jubilating and hugging each other, I remember sprinting a few kilometers too in joy, I was barely 15 years old then but I felt a joy that I would probably never feel again because Nigeria will never be caught in an Abacha situation again.  Saheed now drives a  truck, he’s still hale and hearty 16years later, his sickness was your father. Abacha didn’t bring only death and fear, he brought disease on millions of Nigerians, imagine the number of people that died from the medicine defying disease called “abacha“?
Someone commented on your letter somewhere online that “no son of Abacha posses such intellectual capacity displayed in your letter”, I want to agree but in a different way. If you actually posses any iota of intellect, you should be ashamed to have been born by such a demonic character and probably dis-family and disconnect yourself from such an odious lineage. Just some minutes after your letter struck the web, the US Department of Justice released a statement indicating that they have just frozen over $500 million stolen by your dada 16 years after his death, here is the link if the news never reach Kano http://nigeria.usembassy.gov/media_03062014.html. If there is so much to be frozen after so many years, and your family has been living so large without any physical or formal investment, in the least, a cyber café like IBB’s son, then you should renounce your identity, denounce your ethnicity and change your name to “Sadiq Wole-Soyinka”, that will command more honour anywhere in the world. If your elder brother Mohammed was smarter too, he would have changed his name to probably Abiola, and wouldn’t have waste so much money on Buhari and CPC so he could get a diplomatic passport that will enable him travel to different parts of the world and harvest the loots that had been starched away by your father and his cohorts. I am glad he failed in that quest, and your uncle Buhari is still on the hustle, probably his unholy alliance with the Abacha’s brought him the bad luck he needed, I hope he fails again this time.
I would have loved to spare you the details of what we went through when your “okola” heavily tribal marked father was on the throne of iron in Aso Rock, but that will be too much details and I am sure you are too dumb to understand at all. He was so demonic that the heavens had to intervene. It took a Papal visit to destroy his defense, even death had to wait for God to strike before taking him away. I wonder the kind of man he was at home, how hajia bore his sweat to bring you to this world, even a sane horse wouldn’t allow a man like your father to mount or ride. If your new uncle GEJ thinks honouring Abacha and his ilk will win him northern votes, he has failed and probably just dug his own grave.
I am not writing this to defend Prof. Wole Soyinka because he’s not a man without his own shortfalls just like every man, but I salute him for refusing to stand on the same roll with a pig like the thing you call a father in the name of national honour or centenary celebration, even a pig will grunt, scream and whine if tied, gagged and placed beside the picture of Abacha for honour. If the living ones stood to accept in the name of nationhood, I am sure MKO, AWO, SAB, ZIK and other dead patriots and heroes are still rolling in their graves in horror of what our forever senile GEJ did with their identity on the ground of centenary celebration. As much as I would have loved to spare you more details on why your daddy’s name should be mentioned only in pigsties, I won’t, I choose to remember the miracles that happened on his deathday and how Nigerians, all over the world “Danced Like David Danced” when the spirit of freedom landed on us with the news of YOUR death. I have forgiven him though, but it will be nice to forget his wives, sons and daughters in prison for the life they’ve lived on the stolen wealth of Nigeria.
Soon I will become the president, and it will be a honour to reclaim this honour for the likes of Ken Saro Wiwa if it is the only thing we can recover from OUR wealth and honour stolen by your family and your absolutely corrupt and despotic dada.
iThink, iWrite and iActOnIt
Twitter: @enyola
Continue reading