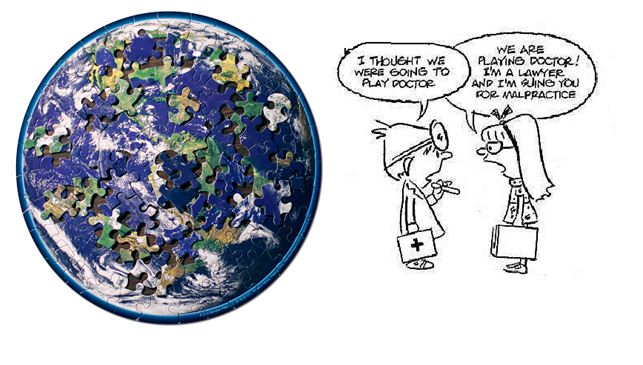 It’s like being a child of your parent, a brother or sister to your siblings, a husband or wife and father or mother to your children, a friend of your friends and problem to your foes, it is being a little bit of everything without conflicting your role as an individual or duplicating your identity to function as all of this characters at the same time, it occurs naturally, a part of your natural identity and it only takes you being you for you to function in this position all at once. Your being a father or mother to your children doesn’t stop you from being a child to your own parent or uncle to your nieces and nephew and more, it all happens at once, each unique role, perfectly performed at the same time without losing your identity, it the same as well as your role as a citizen of the earth, it is natural, undeniable and cannot be transferred, abandoned or ignored, and has nothing to do with your abilities, gender, status, background, faith, color or ideology, it is part of you being a little bit of everything as long as you are human and a change of name, gender, nationality or belief does not in any way nullify or change your role as a citizen of the earth.
Every element existing in this universe serves a unique purpose to maintain a balance in nature and so do I. My ability to identify and define this role substantiate my purpose for being here on earth and any attempt to abandon, shortchange, modify, reject or totally deny this role sums up to abuse, creating an imbalance that is irremediable by any other person than me, and this is true for all men it is therefore imperative for every man to first find his/her purpose as a human, find her place in the order of life and serve his/her purpose without reserve whether whole, blind, lame, deaf or dumb because only when this is done that the earth will remain livable for all and sundry for as long as it exists. The good news is that the role of every element of nature is predefined, but the big question is now,

“How Do I Find And Play My Role Effectively?”

The role of every element on earth is indeed found in its nature and it is the same for man, but instead of functioning exclusively as humans, we intentionally bludgeon our role as defined by nature trying to be something beyond our reach, and creating more problems than nature itself can solve, calling on us to reverse our course and get back to nature.
We invented guns and bombs but instead of using it to hunt food, and break rocks for road, we turn it on each other and complain about war and conflict. We walked into the corridor of science but instead of curing diseases, we created more and tested it on humans just for the fun of it in the name of research. Immigrating horses are treated better than immigrating humans in the gulf of Arabia, and dove in the courts of the Vatican gets more grain and clean water than the children in war camps in Central African Republic or the Sudanese refugee camps in Kenya and yet we preach religion instead of concentrating on humanity as a single entity, either black or white. We polluted our planet by our own actions, but instead of cleaning it up with our reactions, we are thinking of running to Mars. How I wish we can just concentrate on our primary role of being humans, the custodian of the earth and north rulers or world power.
When a child is conceived, nature defines the fetus’ gender according to its needs; male or female, living the seed neither the choice of race nor nationality, only ensuring he/she joins the human race. Through education the child is groomed, and even without, the child is groomed as well and placed into an existing society to serve a pivotal role in the ecosystem of such but the excuse of choice and pleasure deludes us, and we dump our role as males, females, husbands, wives to become the opposite or nothing, abandoning our roles and leaving it to burden others, creating more irreversible problems and our biggest excuse is choice.
If homosexuality is a choice hinged on the freedom to choose a sex partner, then a word like “Incest” should not exist, it fits thesame criteria, “Choice of Partner“, it’s all a choice as long as force is not applied in the choice process which makes it rape whether straight of homo. Let’s see who will give birth to the next generation, two males or two females romping on each other like bald grapes? Our roles as humans cannot be traded on the stock market of choice, it’s a function, a role that must be played or else, a bigger irreversible price will have to be paid.

“Medical waste is posing a growing problem worldwide, jeopardizing the health of staff, patients, disposal workers and anyone else coming into contact with the often hazardous materials discarded by hospitals and other health-care sites, a United Nations human rights expert said today.”—UN.

The sad part of this development is that a good percentage of these medical wastes come from choices. George, a man suddenly gets tired of being a man and heads to the hospital to become a woman. Stella gets tired of looking like Stella and heads to a plastic or cosmetic surgeon with a picture of Beyoncé. To treat Malaria, a real sickness, one or two syringes will do the trick while an healthy George and Stella will generate a bucket load of health waste just for a pair of boobs in place of muscle, a strange genital where it shouldn’t exist and a new look. Jane was born as black as Lupita, but now she’s as white as an albino with dark knuckles and knee cap, with a skin texture that wouldn’t allow him function beyond the dark hours but her knowledge is needed in broad day light so she denies the earth her nature given value, creating a problem for others to solve.

“One in 500 children is seriously affected by facial disfigurement. One in 100 children has a noticeable facial or other feature”—BBC.

Hundred of children leaves with natural and birth defect needing real medical attention but they get none because they lack the fund or the doctor is busy making Jane look Beyoncé and George look more like a clown.

Governments spend trillions of dollars on military research every year and another truckload of billions of dollars on choice-based medical research while the real issues that affects humanity rely on philanthropy to get attention. Religion carts away trillions in tithes and offerings, seeds, zakat and more. The Imam rides with a convoy, the pastors and bishops fly and cruise and they still stand up to ask you to give your shirt to the naked, when the religious establishments are already rich enough to establish a clothing line dedicated to employing the jobless and clothing the naked. Our young and learning men lives in hostels not worthy to be ranked as jail houses for conmen, requiring only a few million bucks per annum to keep it livable and conducive for free, but instead, our congress men get billions in furniture allowances and they are still paid to sit.
Now the earth is at risk, Fukushima is busy feeding the sea with nuclear poison, Iran is nuke ready, the ozone layer is depleted and there are now two suns serving Maiduguri. Instead of war on poverty, maybe Detroit will be off the list of the most dangerous city on earth, America is busy searching for another Libya since they are unable to violate Syria, and Russia has got a perfect excuse to enter Ukraine, “we are protecting our people” they say, I wonder why the thirst for world domination?

Ammunition makers are in constant production with more research on death and destruction, while we are praying and dreaming for the wars to end on the streets and the borders of North Korea.”What a dream!”. An outright ban is still on Mary-jay sativa the healer but Tobacco the killer is rolled out in trucks and train, christened Cigar and Cigarette, after all, a lot of research is going on to help keep lung cancer patients longer on earth. “I think I need me a gun” like the Irish would say, who knows, a Zimmerman may be driving by tonight, returning from getting some crack in the corner, all in the name of CHOICE?

We all know our roles but we just refuse to play it, my role and your role is the same, it’s only clothed in different garments of a doctor, lawyer, engineer, politician, herbalist, government, citizens and more, our role as humans is not a choice we chose or a choice we can make, it is already defined by nature and it is on us to honour our identity, find our role and play it effectively.
My first role as a human is to be a man and next a Nigerian that lives for God and men. Amen!
I am Abidemi Babaolowo Oderinlo
I read what I need, I write what I like and act what I write.
I tweet from @enyola
Continue reading