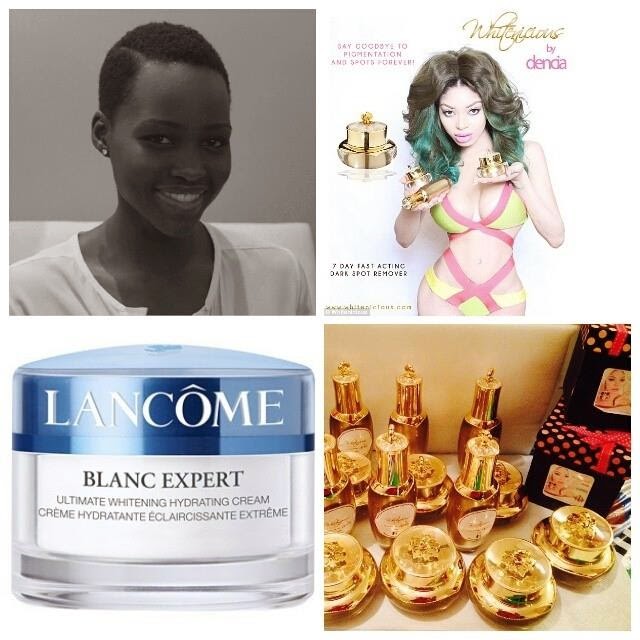 Lupita Nyong’o announced her ambassadorial contract with Lancome a French  cosmetics giant a few days ago and the whole black world went agog with the news. I found the information of Kola Boof’s Facebook page but the first thing that came to my mind was “Cosmetics?” I decided to find more info about what they sell… A lot of products but hey! they sell bleaching and skin whitening creams… Hmm! why didn’t our black skin activist notice that? Is it suddenly cool to bleach because Lupita is the new black face of Lancome or is it just so cool to compromise your standards as long as money is spoken?
I remember listening to the glistering speech of this dark and lovely Kenya Hollywood actress a few weeks ago and my head was getting great vibes as she told the tales of how she found real beauty on the dark golden skin of Alek, the Sudanese super model and how she prided in her own beauty black beauty from it. She expressed her struggles and even shared the story of that young girl who was about to get Dencia’s Whitenicious cream and how her own dark-skinned success changed the little girl dark golden skin story.  Her essence in that Essence speech was a grand stand against bleaching and whitening of dark skin, but here is another shade of the story she delivered for Lancome!
I was so sad to see scores of women that waged war against skin whitening and bleaching, women who plagued Nigeria because of Dencia’s Whitenicious roll out drums and gongs celebrating our new bleaching ambassador, Lupita. More money is involved I guess, so we can all compromise a little. The truth is Dencia was just doing business too and she wasn’t forcing anybody to buy or bleach, in fact, more people will buy Lancome skin toning, bleaching and whitening creams more than they did Whitnecious because it now carries a black identity. I think that’s cool, bleaching gospel of a black Hollywood screen goddess rolling and not a hustler like Dencia or am I missing something here?
I am not in any way supporting skin bleaching, neither is my argument for Dencia any other bleacher or against our new bleaching ambassador Lupita, my question and concern is simple…
Where is Lupita’s essence? What will she tell that little girl now?
“You can buy a bottle of the skin lightening cream but not the whitening one!”
or she will tell the rest of us…
“Don’t buy Lancome skinning toning products, they’ve didn’t tell me they sell bleaching and whitening creams in my contract”????
As far as I am concerned, Whitenicious and Lancome are two cosmetic companies selling similar products, one is just bigger with a wider range of product and the other is smaller and the business of a hustler trying to break big like other big cosmetic product company.  To shock you a little, Lancome started with five perfumes in 1935 and now the make not just perfumes, but skin damaging, skincare and makeup products. Whitenicious started with five types of skin damaging products, maybe in years to come they will make skincare products too #JustSaying
Talk Talk said this on the YouTube

“Sad how she calls out the owner of Whitenicious “Dencia” on her Essence speech about selling bleaching and whitening creams. Which if I’m not wrong ; she stands against skin bleaching and being the new ambassadress for Lancome who makes and sells bleaching and whitening creams as well; she quite a hypocritic act for her. That tells the “little girl” who wanted to buy Whitenicious by Dencia that, hey when there is money involve forget your believes and go with the money. I wonder what she is thinking right now.﻿”

But there are hypocrites like me who thinks it’s cool as long as you are big like Lancome.
Newley67 said

“most companies sell bleaching creams but not everyones intent is the same as Dencia’s as in to completely change shades.. If used correctly and sparingly it can helping with bruising and scarring from things such as acne marks.. I’m just saying.”

Maybe Lupita is just with the Lip-gloss section like Emma Watson who is just the face of Lancome new lipstick range “Rouge In Love”. One thing I’ve come to realize is that we are humans in the least and the truth is, we are quick to preach what is working for us, forgetting who we are and what we really stand for.
Lupita was never an anti-bleaching agent, in fact, she confessed to giving in to the thought of bleaching at some point but won the battle when Alek the Sudanese supermodel showed up on her screen. I am still 100% in love with Lupita the actress but anytime she speaks about life and principles, I beg the world to watch and remember that she’s only acting, she doesn’t mean what she’s saying, it’s only a script. My anger is however with those men and women who blindly follow trend and pretend to have value while they truly don’t, they stand where the crowd stand…
Yesterday it was anti-bleaching and anti-gay law and they screamed at the top of their lungs without reasoning, shouting Nigeria, Dencia et al… Today it’s Lupita the screen goddess and even if she goes porno, they will tell you her job requires friction and showing a lot more skin… Tomorrow they will be there to carry guns and sickles to bury whoever or praise whatever as long as it’s up there, somewhere in the news.
We must define what we stand for and be ready to stick with our gospel all the time. Nas once said he will never preach the gospel of alcohol but he goes around with a bottle Hennessey now even if he’s going to the White House. Money Made Men Mad?
Before you say I am Pro or Anti XZY (product, people or value), ask yourself “Will I still stick with my gun even on death ground?” If your answer is no, abeg shut your trap and let the crowd screams and moan all they want. As for me, I am forever against Rape, Bleaching, Drug Abuse, Prostitution and Corruption aka PDP… don’t tempt me with ministerial appointment though, I don’t trust myself because the scripture says I shouldn’t.
I’m Abidemi Babaolowo Oderinlo
I Read What I Need, Write What I Like and Act What I Write
Tweets from @enyola
Continue reading