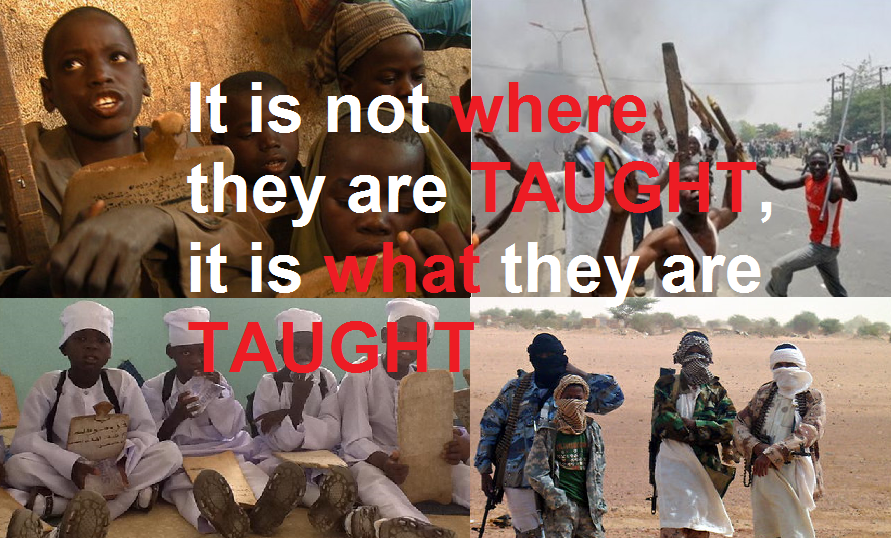 The Source, The Solution To The Menace Called Boko Haram II

The Source, The Solution To The Menace Called boko haram I

Teachers are the backbones of any nation because they are responsible for shaping and nurturing the future. In Northern Nigeria, all Muslim children receive basic Islamic education while other forms of education are given less priority because religion is heavily woven into the fabrics of the daily being of the people. In this Islamic education dominance scheme, the truths of Islam are taught sparingly while the extreme values are hammered in harder, sometimes without the consent or knowledge of parent because it’s not necessarily required. Everything written in Arabic is considered the truth and every other thing is left to fate under the demeaning excuse of  “Qadr”–The will of God. If you doubt my assertion on Qadr, ask the Muslim parents of some of the recently adopted Chibok girls and see if they won’t consent that it is to the Will of God. I believe in the Will of God too; but I am also conscious of the actions of men.
Children in the north are taught lies about other religions, and instilled with zero tolerance for other believe systems from a very young age through their Alfas by design, to preserve the larger north the way it for personal gains. This sordid foundation creates a very large loophole that can be easily and readily be explored for personal gains by elites, spiritual and traditional leader in the northern society. Boko Haram insurgent and other greed driven Islamic sects depends majorly on these loopholes to fuel their unholy crusades, using the opium of the people as the tool of approach in recruiting young Nigerians into their fold. They re-twist the already twisted doctrines and use it to drive the already synthesized passion of an average northern youth into believing that they are doing the will and purpose of God while using them to service personal business or political purposes of whoever they serve. All you need to do is present it in Arabic with a straight face and  an alluring rhetoric.
Perhaps you want to test how indoctrinated the north is, write “The Devil Is A Liar” in Arabic on a piece of paper or find the Arabic translation of “Things Fall Apart” by Chinua Achebe and set it on fire in broad day light in any part of Northern Nigeria, urban or rural. I can guarantee your charred or mutilated body will adorn the front page of all newspaper across the nation the next morning with a screaming headline accusing you of burning the Holy Quran. The erstwhile CBN governor is rumoured to be guilty of such act of impunity during the days of Abacha, instigating the death of a man because of piece of printed paper was burnt. He was spared by a royal lie because Abacha had all involved in it eliminated. I wonder when a piece of writing that can be bought on shelf became of more worth than the life of men because it supposedly contains the words of God in Arabic lettering? The thing is, Arabic as a language is painted as the truth instead of the truth Islam, therefore anything presented in Arabic is swallowed “Hook, Line, Sinker, Boat and Fisherman” along with it without any attempt to confirm if it is a message from the Holy Quran, the teaching of The Prophet (SAW) or just the idea of bigot who needs a constant supply of foot soldiers for their never-ending unholy conquest.
Boko Haram grew in the same way Mai Tatsine did and they evolved with a similar crusade, perhaps BH is a metamorphosis that took years to emerge. The sect was able to establish itself and recruit people in the manner of its predecessor because of the faulty fundamental value system and believe of Northern Nigeria as defined in the teachings peddled by crooked Islamic tutors and scholars. Not much has changed since the days of Mai Tatsine and now. An average northern child is still being loaded with junks in the name of religion and tradition; the elites allow it because it provides them with zombies and soldiers on their continuing quest for everlasting power and dominance over the Nigerian state. Young Nigerians are tutored out of their will in the name of Islam; they become drones under the illusion of Jihad, and the dearth created anchored on Qadr. They live to be instructed, devoid of creative thoughts or the capacity to make choices, they wait for manner to fall from the state capital because two-third 2/3 of the population depend on Local Government allocation and other government establishment for stipends and sustenance, while the remaining one-third 1/3 are subsistence farmers. The elites, a miniscule decimal swallows the state resources, living others in penury, only a few unusual ones breaks the barrier and they are quickly absorbed into the elite “GroupDom”, placed in exalted public offices through state influence and kept out of the poverty loop that is maintained underground through the whims and caprice of religion and tradition.
Have you ever wondered why the north is in such dearth and denial when the VP, Senate President, Head of Service, IG of Police, CBN Governor, CJ of the Federation, Minister of Education, Chief of Defense Staff, Comptroller Gen. of Customs, Prisons etc., Major percentage of Petroleum Product Marketers, 80% of Oil Block Owners and even the Richest Man in Africa are all northerners while Northern Nigeria is still acclaimed the poorest and most educationally backward in Nigeria when all these major positions had always been filled up by northern representatives including the presidency for a major part of the last five decades? It’s a conscious choice of northern leaders. 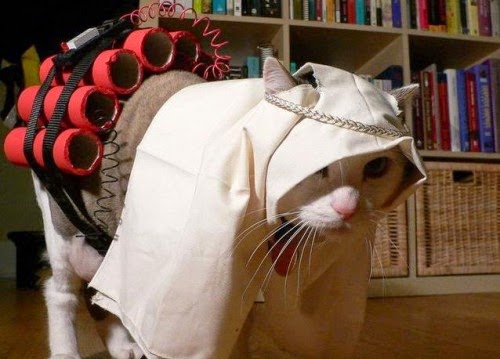 THE WAY OUT
If we must rid of BH from the root, we must direct our energy and resources towards refining the Basic Northern Educational System (BNES) from ground up. The walls of the current decadent BNES are hard and tall, but they are penetrable using the underlying principles keeping it firm; Islam. Nothing else appears more charming to a northerner than religion.
What we need is a new platform that readily absorbs the existing lot that are everywhere doing nothing, going round like time bombs ready to explode, and introduce them to value driven engagements and the true beauty of Islam so that they can find value in self, and put a new meaning to life.
The new institutions must be chaperoned by a new crop of Islamic scholars and teachers that are grounded in the truths of Islam (like the young man at the Tony Elemelu foundation event), preferably exports from the Middle-Belt and south and their training will be structured to infiltrate the twisted belief system that is already dominant in the mind of the young people, guiding them towards the truth of the wonderful religion of peace. This new institution will not replace the existing educational system totally in the beginning, but rather inject the truth tenets of Islam and other value driven knowledge back into the foundation and building blocks of Northern Nigeria while running concurrently with existing system through a huddle system until it grows into redefining the nature and nurturing the future of the north and Nigeria in the end.
The platform should be institutionalized to accommodate and absorb adolescents that are already out of school (mostly fresh out of junior secondary because a lot of them don’t go beyond that level), train them on vocational skill, and continue with them on religious and formal education to ensure a proper grooming and development.
The institution should also adopt the approach of developmental teaching using religious tools by identifying and highlighting the developmental values of formal education with examples of events in the Holy Quran. For example, the building of the beautiful Saudi Arabia and the Arabian Gulf countries through appreciation of modern Architecture and Technology, the building of ships and development of maps how it aided the prophets in travelling and taking Islam to various nations of the earth through the appreciation of Science and Engineering, and how further development will help spread Islam and not the force of unholy Jihad which only brings death and destruction. This will help redefine Education as Education, and not as Western Education, creating a new interest in the people and removing the warped perception that being educated is against the will of Allah.
Incentives must also be offered to make the truth more attractive, opportunity to study Islamic Studies, Engineering, Computing etc. in formal institutions located the Middle East and Arabian Gulf through scholarships and sponsorship should also espoused for this purpose.
A foundational system that combines the real basic Islamic and formal education at the primary level so as to ensure a thorough integral foundation of the children in Northern Nigeria will birth a desired future for the northern states whether as a part of the entity called Nigeria, or an independent state filled with people of different cultures and tradition, living together as one. My target is for us as a people to raise young Nigerians from every corner of the nation that sees the truth in Arabic and Islam, and not the Arabian language or text as the truth in its entirety.
Permit me to share some truth about Islam with you from the Holy Quran with you as against the religious lies of the North and the sacrilege being peddle by boko haram. Imade Alonge Ize-Iyamu wrote

” The bokos kidnapped girls and forced them to change their religion.
–Islam says: “Let there be no compulsion in religion…” (Qur’an 2:256)
The bokos have forcefully married off girls.
–Islam says: “Do not inherit women against their will” (Qur’an 4:19)
The bokos are aggressive towards those who do not follow their beliefs.
–Islam says: “IF IT HAD BEEN YOUR LORD’S WILL, all of the people on Earth would have believed [in one religion]…” (Quran 10:99)
The bokos have murdered thousands of Muslims and Christians alike in cold blood.
–Islam says: “…if any one slew a person – unless it be for murder or for spreading mischief in the land – it would be as if he slew the whole people: and if any one saved a life, it would be as if he saved the life of the whole people.” (Quran 5:32)
The bokos use the cover of Islam to commit their mayhem and claim they are doing God’s work.
–Islam says: “…BUT DO NOT TRANSGRESS LIMITS; FOR GOD LOVETH NOT TRANSGRESSORS. (Qur’an 2:190)“The bokos believe once you are not with them you are an enemy to them.
–Islam says: “O mankind! We created you from a single (pair) of a male and a female, and made you into nations and tribes, that ye may know each other (not that ye may despise (each other)…” (Quran 49:13)
The bokos have unleashed tyranny and indecency in the land.
–Islam says: God commands justice and doing good and giving to relatives. And He forbids indecency and doing wrong and tyranny… (Quran 16:90)

Despite all their false claims its clear, for those who wish to see, that the bokos do not represent Islam because they are clearly acting against it! ”

I bet you are wondering already, what has the teachers of Islam in Northern Nigeria been teaching the children turn adults that are now menace and adults, and their children today?

I am Abidemi Babaolowo Oderinlo
iRead What iNeed, iWrite What iLike, iAct What iWrite
Tweets from @enyola
Continue reading