To understand Nigeria, you must throw away notions like certainty and consensus. Instand, you have to accept you are entering a world where all truth is relative, all fats are transient and what seems to be the most visceral and bloody reality can ultimately be revealed as artifice. It’s about power, power and the construction of truth” – Sanusi Lamido Sanusi

Have you read the news headlines lately? If you’ve not been reading them, I will advise you stay away from it because it will ruin something within if you don’t have a rocky core like me.
It’s amazing, totally amazing the way things are in Nigeria. I am proud to be a Nigerian, grateful to be in this generation but totally ashamed to be an adult at this time, season and days when wrong is right and right is wrong. All thanks to the powerful administration of Goodluck Ebele Jonathan (GEJ), seconded by the forever corrupt mind and heart of David Mark and his league of “Yes Men”. I am almost sure this piece of my mind will appear wrong already although it is the truth, but I am unperturbed or deterred, I am suddenly getting used to doing the right thing and totally feeling it is wrong… the feeling won’t stop me from doing the right thing or saying the truth though… I am unrepentant; I am glued to doing what is right, speaking the truth and baring my mind, whether it sounds right or wrong. I wonder why they’ve not made a law to ban the internet or Facebook sef; it sometimes gives me room for expression beyond my nucleus… I heard it was GEJ that brought it to Nigeria.
The rate at which thieves are suddenly becoming innocent in Nigeria with the approaching election year is alarming, and I am beginning to think the election will be moving us to another planet that has no Nigeria on its map. The heavy weight thieves are just receiving presidential pardon, right, left and center, leaving the politicians that didn’t abuse their offices or position in time past chewing their fingers in regret. That’s how lucrative the business of stealing got in Nigeria’s polity, enough to make the saints regret not dipping into financial sin atleast once while in office. God bless the soul of Dora and grant her Al-Jana, I hope to see her rise in glory when Jesus returns.
The series began with the release of Al-Mustapha “The Professional Murderer” and the pardon of Diepreye Alamieyeseigha, it all looked confusing when it began but now it’s clearer and better and even more unbelievable. More recently, Mr. GEJ made an interesting statement, he said we refer to common stealing as corruption, a statement that was corroborated by Mr. Ekpo Nta, the Chairman of ICPC a body constituted to check Economic and Financial Crimes… Now we see why nothing is checked and stealing is free for all. The constitution as been pushed aside and the idea of these con men is now law in the land, they reign supreme like the horn of a mad cow. Before you we knew what was happening, the conviction of Bode George was reversed, the lawsuit against Mohammed Abacha worth billions in every currency of the world was dropped for potential votes in Kano, the case against our forever ranting Femi Fani-Kayode was swept away for votes from outerspace cum 2015, but I never expected the headlines I saw just a few minutes ago. WHAT IS WRONG WITH GEJ AND HIS GOVERNMENT? WHAT IS WRONG WITH US?? Walahi, I don tire!
Today, the 11th of July, 2014 seems to be the lamest day of all for me by all premise and standard of the GEJ led administration, the headline of today’s Guardian Newspaper is screaming the wrong made right again “Sanusi wrong over alleged missing $49.8bn, says Senate” .. #ADONBILIVIT. 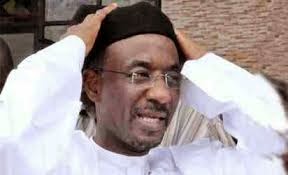 You can call this Yes Men Senators all you want, but this gathering of thieves and squanderers, this congress is indeed a congress so I choose to call them “Baboons”, that’s what they are. Even the devil in hell knows that more than $60bn is missing from Nigeria’s oil revenue, but he’s afraid to say it because it’s tantamount to saying exactly 40 Burj Khalifa went missing from the surface of the earth without a trace. Yes you read that right, the Burj Khalifa cost just $1.5bn and I can say “JUST” because more than 40 times that is missing in Nigeria and the only song we sang was #WhereIsOurMoney, a sordid song that quickly went stale with the lock down of fuel pumps by Diezani. Although david mark (intentionally spelt in small letters because he’s a thieving lowlife) conceded that his “Yes” crew had failed in their duties because the house committee in charge of NNPC had not been working, he was quick to label the truth release by the erstwhile CBN Governor SLS (now Emir of Kano) as misleading, conflicting reports. Chai.. Dairis God oooo!
My fear is not the right or wrong but tomorrow, how will tomorrow fair if the air we breathe today is filled with lies, deceit, corruption or should I call it “common stealing” as GEJ described it. I am afraid I might not be able to lead the next generation in the right way because the path is seemingly reversed already, I can say go this way, but I won’t be there on the streets, in the schools, in church and mosques, on the play ground, on TV and everywhere else at all times to affirm that the truth is actually what is being portrayed as false by the society and not the other way round. I know I sound confusing already but the truth is gradually becoming confusing… How on earth will I explain that the child bride “14 years old Wasila” is not guilty of murder although she poisoned her 35 years old husband? How do I present Abba Moro as a murderer although he was neither at the venue of the stampede nor physically responsible for killing the 19 young Nigerians that died 2014 or the ones that died the year before in a similar job scam he organized? How do I tell the world of today the about the truth behind “The Menace Called Boko Haram“, helping them break away from religious innuendo and see the way out? I am afraid it’s all dabbed wrong already and even the truth can’t seem to make it right but I’m an irredeemable optimist.
I am a believer so I am going to hold onto the right and truth, I won’t allow GEJ, his cabinet or his baboons to change a thing because I know in time, Nigeria will grow past this odds. No one starts off being excellent, someday soon, I will be catching an underground train from Ilupeju to Ikeja and it’s just going to be a 10mins ride. If I am here today, still proud to be Nigerian, then there is some good in Nigeria, there is hope, a future and I know I’m not alone. It’s worth fighting for!
I am Nigerian!
I am Abidemi Babaolowo Oderinlo
iRead What iNeed, iWrite What iLike, iAct What iWrite
Tweets from @enyola
Continue reading