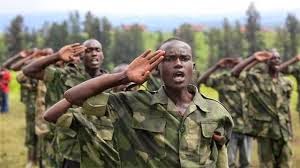 It is no longer news to hear of military violence in Nigeria and it is always between the army and another arm of the force, especially the Police; it is no longer strange to see soldiers harassing civilians, especially when they are in convoy or they  find a civilian wearing casual camouflage accessories even though it is legal to wear it. It is now common site to see the Nigerian government using the force to intimidate, shun and oppress her citizenry into succumbing to their whims and caprice especially when the people rise to make demands for equity and the rule of law, or more common is the arson against opposition to express and effect dominance; but it gets stranger when the military suddenly becomes the enemy of the state it swore to protect, taking lives and destroying the properties of the country and state that gives it the power and the military identity it wields.
This is not about military rule or coup de tat, it is about the experiential contact with Nigerian soldiers every day and how their status as military men as come to establish them as agents of destruction either in time of peace or war. Gone are the days when the military was glorious and noble, when soldiers were revered and respected… Now they are mere lying scumbags that looks like piece of shit to every right thinking citizen of Nigeria.
I remember being harassed by a pot-bellied colonel inside Yaba College of Technology in 2008 because he felt he was more a Nigerian than the rest of us… Grace saved him from being lynched because I exercised caution, students would have been delighted to have a free-for-all on him. I also remember running into two military men harassing a trader in “Egbeda” market area of Lagos in 2010, they were hell bent on seizing the children school bags she was selling because they were made with camouflage material, but the crowd that gathered from the cry of the woman suggested they buy it off her at a fair price if they believe it should be a military souvenir, they bowed to reason and left in the end but I was disgusted, will toddlers been seen impersonating soldiers with the tiny, scruffy looking back-pack?
Adorning your body with any military looking effect could get you vandalized like the BRT buses that were torn to shred, and burnt on Ikorodu road recently if you mistakenly run into a soldier or military looking personnel on the road. The chances you will run into one is very high because Nigerian soldiers no longer live in military barracks, they are more popular on the streets than pure water in traffic, and the amount of revenue lost by transporters to carrying them around Lagos for free as “staff” is getting scary. With just a stern look and a military cap; I could go around Lagos, shuttling buses without paying a dime.. that’s the level of abuse, and that is what they forcefully protect. The military is no longer honourable, they have degenerated to the level of policemen, the world famous street beggars of Lagos (police aka “olopa”: A group of federally employed miscreants that condone crime and are constantly #DisturbingLagos).
04/07/2014 was another day in the history of senseless violence for the “Enemy of State”, the Nigerian Army. Nine BRT buses belonging to Lagosians and the Lagos State government were vandalized and burnt to ashes because a law breaking military personnel was allegedly knocked down on a lane dedicated BRT buses. The good part of the incident was that the soldier involved in the accident survived it, stood up and called for backup because he felt the BRT bus driver was at fault when he was evidently driving on a barricaded lane dedicated to BRT buses only. When his irate colleagues got to the spot, they felt the same way too. The stopped more BRT buses, harassed  commuters and vandalized state properties. Let us liken this incident to the event of a British soldier jumping on an underground train track, and the crown’s military go on a rampage in retaliation, burning trains because they got angry that the train could have braked and avoid hitting the soldier. It’s unheard of, unbelievable, inconceivable, insane, unthinkable… Only in Nigeria, not even in Togo, only our branded thugs can do it. 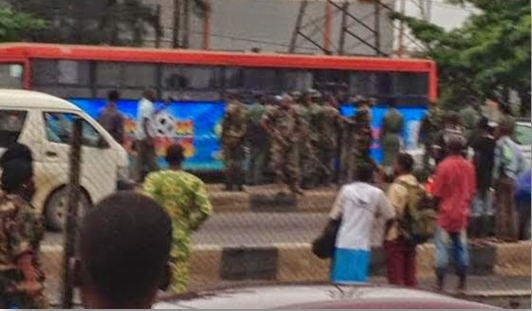 I have been to a few countries, very few I would say across the UAE, UK and Western Europe but I’ve not been lucky enough to see a single military personnel and I be “wakama”. The closest I’ve done is being driven past a military base in Germany versus seeing military looking guys in Paris, but in the end they were normal policemen in camouflage. Even in the US of A, the military live in military zones and they don’t go around in their uniforms anytime they are out on the streets…Never! I have a cousin that served in the USA army so I know a little from asking. Here in Nigeria, I’ve seen more military personnel than the number of books I’ve read, and they are always everywhere, in the cities and on the streets, demanding the respect they’ve not earned either by keeping the peace within Nigeria, or fighting a war to defend her on the outside.
I remember when I was younger, growing up in Ipaja was fun, I lived a few kilometers away from a military based and the few we met were honourable men that behaved well-mannered and orderly such that you just want to be a military man when you grow up (not like Abacha or IBB though). Going towards the military base (Ikola/Command) was like going to see the haven of the gods… and I was always jealous of my mates that were students of “Command Secondary Schools”, I even had a cousin that made the experience even more heavenly that I just wished I could endlessly… That is in the past now, the military is no longer respected but feared. They are now common sights, during rallies, campaign, elections, burial, birthday, naming etc… they are now like mere house help, carrying bags for the president and holding umbrella for expatriates with an insatiable knack for harassing citizens and destroying properties. They have a rich history in that though dating back to ’78 when they threw Olufunmilayo Ransome-Kuti from a balcony and ransacked Kalakuta republic, the home of Fela. They’ve always been errand boys and animals, maybe I forgot for a while. But then they received orders, now they are so disorderly that they act on impulse, they don’t even wait for any orders, they just act with impunity, with the gait of demi-gods.

THE BRANDED THUGS aka THE NEW AREA BOYS

In October 2005, a vehicle conveying commuters was stopped, it had a soldier on board in mufti (staff)but the police still held the vehicle for breaking traffic rules either way. The military officer felt embarrassed after identifying himself and the policemen didn’t sway, he promptly returned to his base, the Abati Barracks, Yaba to mobilize his colleagues on a vengeance mission. The mission left four policemen dead and 60 charred vehicles, while many Police buildings in the Area ‘C’ Command of the Force, at Surulere, Lagos were razed to the ground. These military arsonists stormed the detention cells at the Police station, pulled down the cells’ doors and iron protectors and released all suspects, among them armed robbery and homicide suspects before setting it aflame. State properties worth millions were destroyed by this “Enemy of State”. In a military response to the assualt, they claimed it was “Area Boys“.
– See more at: www.vanguardngr.comby clicking here
In May 2011, the 424 Army Battalion men killed Policemen and razed down police vehicles and installation in Badagry after an alleged confrontation between the two forces. The survival of the attack ASP Taofeek Afolabi gave a good account of the incident but the in a press statement released the next day by the army spokesman, Brigadier General Raph Isa he said “Let me state categorically that no Nigerian Army soldier was involved in that reported incident in Badagry, the attack was by ‘Area Boys’ ”.
The 04/07/2014 BRT vs Military case was all the same, the interesting part of the story is that a BRT bus had broken down at the spot a night before and was not in motion. The BRT staff and driver were trying to fix and move the bus when the accident occurred, that was why the accident wasn’t fatal enough to kill the victim.  After burning it all, the military spokesman readily blamed the act on “Area Boys” all over again, only that this time we have pictures of soldiers caught in the act… I was expecting him to say “Unknown Soldiers” like in ’78.  Here’s the evidence and result in pictures. 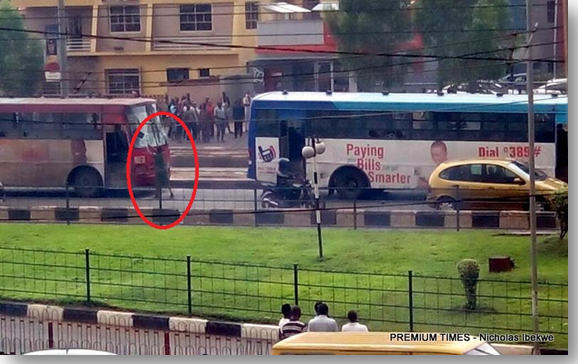 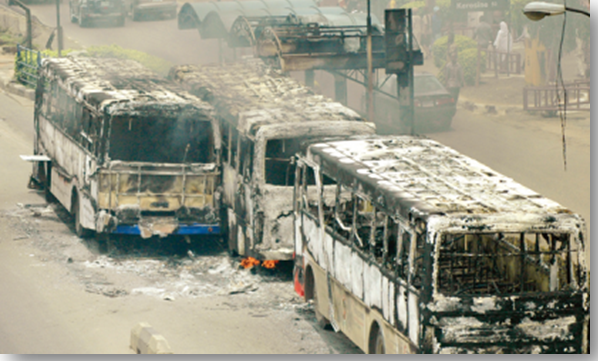 Now we now know that soldiers are the new “Area Boys” according to the military spokesman, maybe a new intelligent unit that specializes in the destruction of life and properties is what they use the pseudo “Area Boys” to describe.
The next time you hear the phrase“Area Boys”, stay very clear because if you don’t, you will be dealing with perfectly branded ‘Enemies of State’, clad in uniform and equipped with the taxes you pay to act as thugs for politicians in times of elections, and irrational when they will. Their fury on the weak and defenceless is always baseless so beware.. I’m praying for those in the forefront of the BH war front though… Victory Belong To God and he will give it to us.
#BringBackOurGirls
I am Abidemi Babaolowo Oderinlo
iRead What iNeed, iWrite What iLike, iAct What iWrite
Tweets from @enyola
Continue reading