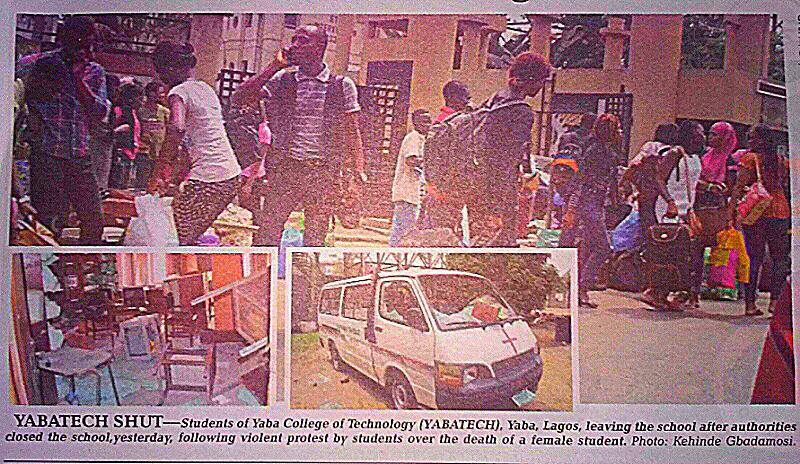 It has been a sour taste on the lips of every student and members of staff of Yaba College of Technology (Yabatech) since the eventful death of (Late) Ms. Charity Dazan, a final year 1st class student (HNDII) of The Department of Office Technology Management (OTM) and the best of the department with a CGPA of 4.93.

The deceased “Charity” was reported to be a Sickle Cell Anemia carrier. She saw signs of her impending crisis on Wednesday and visited the college Health Center where she was reportedly treated with negligence. According to inside report, she was told there was no bed space available, and before she could get across to any member of her family, her crisis aggravated and she collapsed. She was later rushed to an hospital where a deposit of N35000 was demanded and in the process, she died.

When the news of her death filtered into the College, all hell broke loose and the students blocked the two gates entering the school, demanding a change in the sick condition of all facilities in the school clinic and hostel, the reinstatement of the suspended Student Union body and a shake up in the administration of the welfare of students. The news filtered out through social media and a few journalist made there way to the College to get facts, opinions and first and reports.

Instead of allowing free access of information by journalist, efforts to suppress media reports of the story was initiated by the school authority. Security personnel on the campus detained journalists who arrived to interview the protesting students. Electronic equipment was forcibly seized from the reporters and their recordings wiped out (according to Sahara Reporters).

On getting information about the detained journalist, students weighed in on the matter. Those who also said they saw the remains of the deceased being poorly handled, eventually went to the security post to get the detained journalists released and began a fresh protest for an open coverage. The second round of the protest went well into the early hours of the following day.

Following the unrest, the administration of the college released a statement:

“The Academic Board rose from its sitting last night with a firm decision that academic activities be suspended for four weeks to allow Management, staff and students mourn Miss Charity Dazan

The Board has ruled that students should vacate halls of residence latest 12 noon today, Thursday February 11, 2016

Meanwhile, the Rector, Management and Staff of Yabatech sympathize with the family of the deceased and with the student body over the unfortunate incident praying God to prevent a recurrence

Management will attend to other issues and requests by students in due course.

We will never forget you in a hurry, We all sympathize with her entire family, May God grant them the courage to bear the loss.”

As an alumni of Yabatech, I have experience the first hand responsiveness as well as negligence of the medical staff of the college. In 2004, a close friend was attacked by cultists just outside the school gate in a case of mixed identity and it was the prompt response of the school clinic that gave him first aid, before conveying him to LUTH in the college’s ambulance. I also personally received first aid at the same clinic when I was involved in an accident, and I was given first aid and promptly referred for dental emergency surgery. On the flip side, I almost went ballistic when in 2008 during my finals, a friend who was also the best student in my department knew she was about to have an asthma attack, walked to the clinic so they can help her manage the situation but was turned back. It took a little bit of threat from me and a few of my friends when we got there for them to realize that all hell was going to break loose if anything went wrong through their negligence.

I believe the problem with this medical staffs is usually their inability to understand the importance of preventing crisis as against managing it. I’ve given two personal example of their response to obvious emergencies, and their reaction to that which they don’t consider an emergency. This careless way of handling conditions nurses don’t consider life-threatening has led to the loss of so many valuable lives within the walls of Yabatech and in medicals facilities across Nigeria, and if nothing is done to re-orientate our nurses, Charity Dazan will not be the last, more lives will be lost through negligence.

The greed and ineptitude of the administration is also a major key in the situation. I remember that sometimes last year, staff of the college couldn’t receive their salaries as at when due because the administration has refused to comply with FG directives on TSA, a situation that could have been avoided, but the management was busy with petty issues, chasing Student Union matters, suspending the current union and bribing the former SU president and NANS officials to stage a media report when the decay in the condition of the hostel and welfare of the students on campus was exposed by Sahara Reporters. A sad tale and a sad twist to the identity of the first tertiary institution in Nigeria, flowing from the corrupt hands of Olubunmi Owoso to the now, soiled hands of Dr M. Kudirat Ladipo.

May the soul of Dazan Charity  Rest In Peace