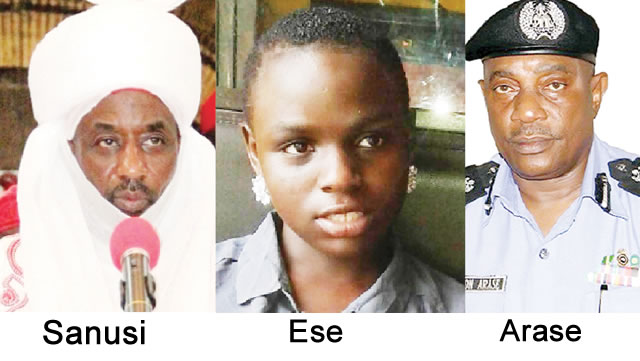 Trust me, I wasn’t surprised when I read on Premium Times that “Ese Oruru”, the 13 years old Bayelsan girl that was abducted and trafficked to Kano State, forced into marriage and turned into a Muslim was reportedly quoted to have said “My name is Aisha Chuwas. I am 17-year-old. I came here to be a Muslim and I will stay here,”  it is called the cucumber “The Cucumber Effect” or “The Anaconda Reaction” depending on the clime and context of the events.

Yes! she’s been told to lie about her age. Yes! she’s been told to deny her parents and claim that she wasn’t abducted but rather, she eloped with her lover. Yes! she’s young and naive, and does not know the gravity of the risk and danger involved in the events happening around her. Yes! she’s been brained washed but not to the point of not wanting to go back home. Her denial is based on one of my stupid assumption, she’s tasted the cucumber and she’s getting used to the feelings, it’s been 6 months in the Anaconda’s temple, and I am almost sure she now loves the strike and would do everything to keep it within her reach.

I remember the story of another Aisha (Zara John) that was kidnapped by “Boko Haram” a few years ago, she was married to one of the young religious fighters and eventually rescued, but she was delighted to discover that she was pregnant with his child following a urine and blood test carried out by a doctor in the refugee camp to which she was taken after her rescue. She was kidnapped at the age of 15 years old, and was rescued when she was 16, everything had changed and the man who was initially her tormentor had become her passion in the space of one year.

“I wanted to give birth to my child so that I could have someone to replace his father, since I cannot reconnect with him again,” she said, “The Cucumber Effect.”

The Aisha of Boko Haram’s first experience in abduction was that of a slave…  “As soon as we arrived, they told us that we were now their slaves,” Zara recalled. She spent her days in pain and anguish, doing chores and learning the tenets of her new religion, Islam, until two months later when she was given away in marriage to Ali, a Boko Haram commander, and moved from a shared house to his accommodation. Comfort came and so did the cucumber, and she was quick to forget her mother, brother and the slave experience she once endured in tears.

“After I became a commander’s wife, I had freedom. I slept any time I wanted, I woke up any time I wanted. He bought me food and clothes and gave me everything that a woman needs from a man.”

Don’t mind that she mixed the cucumber with everything, she actually meant it the other way round.

When asked if she wanted freedom, she said that she would rather be with her Boko Haram “husband”. Her family noticed that she was still in contact with Ali via the phone he gave her, it was taken away from her but she lamented, “If I had my way, I would retrieve the phone number he gave me,” she said, regretting not committing his number to memory.

Now let’s compare the story of “Ese Oruru” with that of “Zara John” (the two Aisha). A 13 year old girl and 18 year old tricycle rider. There is no mincing words in the fact that she was abducted (without force), evidently the Yellow “aboki” has been buying her subtle gifts, making her feel special and telling the girl in her, stories of love and the promise of a better life in Kano. The sad end of this (my assumption) is that her mother had probably not been motherly enough to notice the new trends, perhaps she’s a bit disconnected from her daughter because it took her total disappearance before she noticed that anything was amiss or wrong (you can put the blame on me).

Just like Zara, Ese has been forcefully introduced to unrefined freedom and pleasure and it feels better than running errands for mummy. She’s now operates her own small kingdom that was forcefully given to her and she likes it. Her assumptions gives her the impression that life is better on the other side without giving a peep into the future the freedom she enjoys might bring, and the hazards that come with it. In her naivety, she thinks this is the best that can happen, but unlike Zara, he tongue has also been filled with lies and her heart with perversion. Perhaps, she was never a sweet little girl, but now, she’s been filled with more lies, and deceit is perhaps her definition of justification of this new experience she never imagined could be achieved at thirteen.

When soldiers broke into the Boko Haram camp where Zara was ” living da loca” , freedom or bondage was not a choice; freedom became compulsory. Ese’s mother has broken into the Kano camp of abduction and seduction where her daughter is held, freedom is also not going to be a choice at this point.

I have read reports, listened to audio extracts and to tell the truth, all of her opinions is none of my business. The unholy union that was conceived and hatched through deception must be broken and whether she’s enjoying it or not is none of our business. If Ese wants to be a Muslim as reported, I am sure there are mosques in Bayelsa, and from the little I know about the laws of this land, that choice can’t be hers until she’s of age as defined by law. Whether she now loves the cucumber and wants to stay where she can get it anyhow she wants it is not a concern, marriage can only be established under customary, religions or even legal terms with the consent of parents or guardians, and that is the finale of it. Ese must be returned home to Bayelsa, under the watchful eyes of her parent(s), and the government of Bayelsa because if she’s not watched, she will automatically become a menace to herself and her immediate environment. Remember her hormones are probably on the horns already, if not watched closely, there are still so many “Yunusa Yellow” of Bayelsan origin that will be on hand to fulfill her new found desire for cucumber(s).

I read this morning that she’s been flown to Abuja with her aboki lover boy cum abductor, if the boy is indeed 18 year old, he should be taken straight into custody for kidnapping and child trafficking. There is no perfect excuses for abducting a 13 year old child in the name of eloping in love, it is a criminal act and should be treated as such. If the boy is let loose, a few other men that are born pedophiles will have the right incentive to define it as whatever the state defines this case as and ride on its waves. Ese cannot decide for now, she’s in limbo on reality and therefore should be treated as an innocent accomplice in a crime committed on her behalf.

Finally, I have no reservations for the dumb, crass elitist stupidity that has been displayed by the Emir of Kano on this very case. How can an educated man, a former CBN governor turned monarch the twig in this whole case, all in the name of maintaining peace amongst his subjects. I have always defined him as a selfish bigot, since the days I watched him on TV defending the subsidy moves that led to the very bad situations we are in financially in Nigeria right now. A self serving man who is not only tribalistic, but filled religious bias and contempt in all its forms. I remain unapologetic because if the 13 year old girl involved was the his daughter of that of his associates in any part of Nigeria, the police won’t have to wait for his order before the girl is freed and returned to her parents. I also need some explanation on the stupidity displaced by the Nigeria Police, since when did the police command in Kano come under the control of the Emir of Kano, I thought the police is a Nigerian entity and not a Kano controlled law enforcing arm of government? The CP of Kano should be questioned on this case and all those involved should be arrested for questioning (SLS inclusive), but first, lets take Ese Oruru aka “Hajia Aisha Chuwas” back to Bayelsa.

I’m seriously hoping she’s not pregnant already. I sound evil right, Yes! I am one of the very few evil people around here and I really hope what I hope is otherwise; I hope you don’t get what I mean. Let’s go free Ese Oruru now, we can work on figuring out what I mean later.