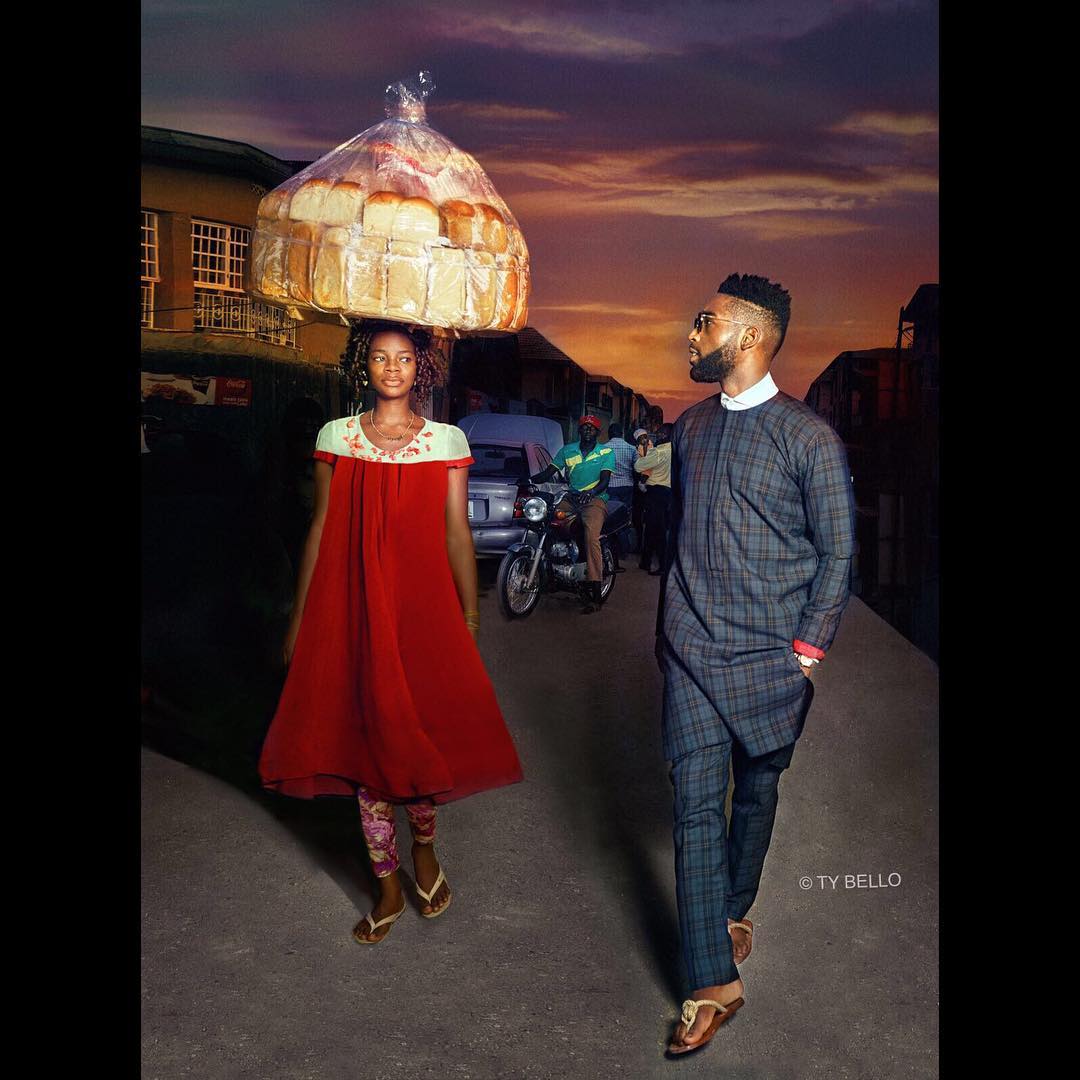 According to TY Bello, this mother of two who came to Lagos to hustle from Osun State accidentally walked into a photo shoot for Tinie Tempah (of the Disturbin London fame) on the streets of Sabo, Yaba, Lagos. Some of her assistants had yelled at the random lady who had strayed with a tray full of “Agege Bread” perfectly balanced on her head to leave the set. TY Bello saw through the lenses and quickly used her artistic imagination to process what she saw and knew it would be a good shot, she asked Olajumoke to stay and asked her if she wouldn’t mind that her picture be taken with the international artiste whom am sure was unknown to Olajumoke, she obliged and TY Bello fired the shots away. Olajumoke did not ask for any financial gratification before she agreed that her picture be taken, I can’t however verify if she wasn’t  gratified afterwards because that aspect of the story was untold. This humble act by Olajumoke was a springboard that shot her into prominence.

If her fortunes were told, and she was informed it will come from selling bread, I am sure she would have assumed and dreamed that she will one day own a bakery. Little did she know that she will be stepping into the limelight hawking Agege bread, or one day become the face of a renowned confectionary line based in Abuja.

Can you imagine the number of people who had said “No!” to similar doors to greatness? Do you know how many people who have lost the opportunity of being shot into prominence through camera lenses?

I remember on many occasions while shooting documentaries, special reports or features etc in different locations across Nigeria, more interestingly my experiences in the “Adire Textile Market” in Ogun State, you would have to beg and make indescribable appeal to this women before their wares could be shot, some would even demand that you reward them for doing so. Many a times, producers and reporters are forced part with money in order to get the job done since the content is actually needed for the commissioned project.

There used to be an Okada rider that around where I lived in Abeokuta, he had a sweet, sonorous voice and sang well, I discovered that people were always on the lookout for him as you are sure of having a jolly good ride with him. He sang so well that he would even render any number you want as long as you’ll part with your balance or give him a little more when he would have taken you to your destination. I felt I could do a special report on this guy so I approached him and intimated him of my intention, to my surprise, he requested that I would have to pay him to put him in the spotlight. I tried cajoling him and emphasized that the report would be aired on TV stations, and anyone with a record company interested in developing grassroots talents could pick interest in him, and from there he could “blow” as it is defined in street parlance, but his response was “egbon e forget joor, ise yin le fe fimi se” meaning  “I should quit the cajoling because the documentary is intended for enhancing my job and not his own career.” I was so disappointed, the best I could do was walk away and leave him to his fate. He was actually right, the project would have added glowing feathers to my expertise just the way Olajumoke has further enhanced the profile of Ty Bello, but who knows what could come out of the report, maybe Olajumoke would have been just another story like his own, not a prayer point wherever he is today.

There are lots of people who have lost opportunities just because they have a very pungent and bad attitude, it is always about monetary rewards, “what is in there for me.” Many cannot even help you blow a speck of dust from your eye without asking to be paid, a huge smile or words of appreciation is never enough for them, something must change hands like regular Lagos police offers. Not all services are meant to be paid in cash, gratification is essential but should not be demanded without decency, and decorum. The biggest enemy of human growth and interpersonal development in our world today is perhaps the demand for “Instant Gratification” and an obscene “Sense of Entitlement” portrayed by so many in very wrong circumstances.

If Olajumoke had asked to be rewarded before her picture was taken, TY Bello would probably have asked her to leave the set or if she was paid, that would probably have been her little and final reward and these BIG ones would have eluded her. Today, the flexibility and capacity of a strange bread seller that came to Lagos from Osun State to hustle has led her to the international flex zone of both cash and kind, just because she was at the wrong place at the right time, but because she was there with the right attitude. It’s NOT all about MONEY! Sometimes, a smile or nod of appreciation could earn you a lifetime of reward.

Ola Omidiji is a professional cinematographer and actor with years of experience in TV broadcasting and other arms of the Nigerian Media and Entertainment industry. He is from Abeokuta and currently lives in Lagos Nigeria.