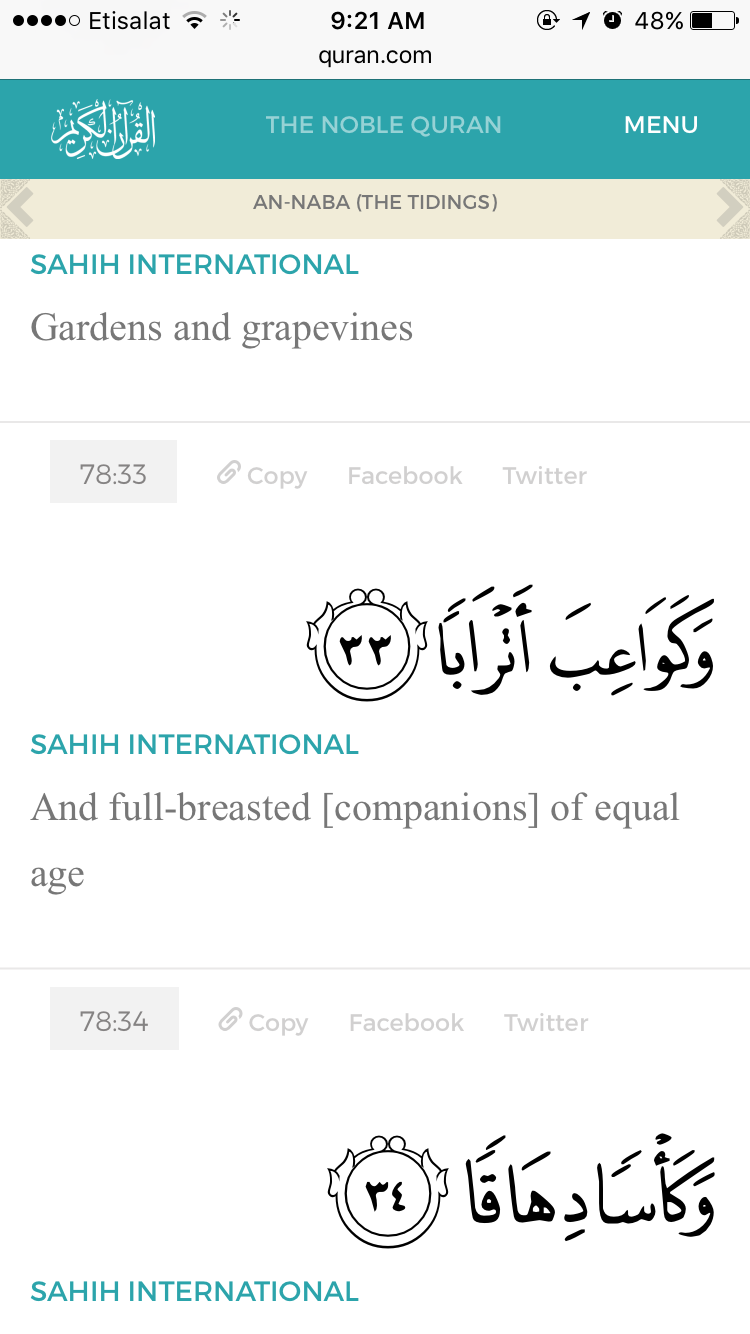 Please if you are a Muslim and your mind is not open to knowledge and learning about what you believe in, please scroll past this because this is not for you. This no attempt to condemn any religion, but an avenue to enlightening one another so we don’t appear as fools when we pretend to defend certain religious subject matter.

I woke up this morning and found damaging text on the Facebook page of my (not very good) friend Edward about religion as usual, but something about Islam this time. That’s unusual because most of his grouse is about Christianity so I decided to thread carefully reading through everything plus the comments to be sure I learn something new. I sure did but not in the comment box, I had to find the answers myself.

Lots comments for and against and somehow, the question of 72 virgins and 80 servants came up and they were quick to deny the existence of such in the Quran, the truth of their defense is that they were right, no mention of 72 virgins as reward for righteousness that can be achieved through martyrdom but the sad twist is that their is promises of virgins with full breasts for righteousness in the Quran. Even young healthy boys for the gays among them is guaranteed. Yes! There’s reward something sexually rewarding for everybody in the Islamic heaven and here’s the proof according to the Quran. Although the last time I sat to take Islamic lessons was when I was less than 10 years old, I’ve read over six chapters of the Quran today and all I am about to share is written therein. I’ve even read Hadiths today and I wonder why life long Muslims commenting dumb-shit have never read these parts of their Quran

Mohammed knew that sex would sell very well among the group of his followers who were motivated to fight battles by the promise of sex slaves and booty. By constantly emphasizing to his followers that they would get untouched virgins in Paradise, Mohammed is clearly expressing his “high” opinion of the institution of marriage and his fairness to women. Once the followers go to heaven, they can conveniently ditch their wives for the fresher and more pleasurable sexual encounters with ‘Houris’ (beautiful virgins). The poor wives who gave up their virginity for the pleasure of their husbands do not get anything. But wait, Allah is all merciful! He gives the wives the rare honour of watching their husbands deflower those 72 Houris (virgins) and 28 young pre-pubescent boys.

The specific Hadith in which the number of virgins is specified is Hadith Al-Tirmidhi in the Book of Sunah (volume IV, chapters on The Features of Paradise as described by the Messenger of Allah, chapter 21) a,bout the Smallest Reward for the People of Paradise. The same hadith is also quoted by Ibn Kathir in his Quranic commentary (Tafsir) of Surah

“The Prophet Muhammad was heard saying: ‘The smallest reward for the people of paradise is an abode where there are 80,000 servants and 72 wives, over which stands a dome decorated with pearls, aquamarine, and ruby, as wide as the distance from Al-Jabiyah [a Damascus suburb] to Sana’a [Yemen].”

(QURAN 37:40-4 : “In the Gardens of Paradise, Facing one another on thrones, Round them will be passed a cup of pure wine; White, delicious to the drinkers, Neither they will have any kind of hurt, abdominal pain, headache, or sin, nor will they suffer intoxication from it. And with them will be chaste females, restraining their glances, with wide and beautiful eyes.”

(QURAN 44:51-55): “Verily! The righteous will be in Paradise. Among Gardens and Springs; Dressed in fine silk and also in thick silk, facing each other, and We shall marry them to Houris with wide, lovely eyes.“

(QURAN 52: 17-20): “Verily, for those who fear Allah there will be Gardens in Paradise, filled with Delight. Enjoying in that which their Lord has bestowed on them, and the fact that their Lord saved them from the torment of the blazing Fire. The Lord will say: ‘Eat and drink with happiness because of what you used to do’. They will recline with ease on thrones arranged in ranks. And We shall marry them to Houris with wide lovely eyes.“

(QURAN 78:31-34): “As for the righteous, they shall surely triumph. Theirs shall be gardens and vineyards, and high-bosomed virgins for companions: a truly overflowing cup.“

Two points need to be noted. First, there is no mention anywhere in the Quran of the actual number of virgins available in paradise, and second, the dark-eyed damsels are available for all Muslims, not just martyrs. It is in the Islamic Traditions that we find the 72 virgins in heaven specified: in a Hadith (Islamic Tradition) collected by Al-Tirmidhi (died 892 AD) in the Book of Sunan (volume IV, chapters on The Features of Paradise as described by the Messenger of Allah [Prophet Muhammad], chapter 21, About the Smallest Reward for the People of Paradise, (Hadith 2687). The same hadith is also quoted by Ibn Kathir (died 1373 CE ) in his Quranic commentary (Tafsir) of Surah Al-Rahman (55), verse 72: “The Prophet Muhammad was heard saying: ‘The smallest reward for the people of paradise is an abode where there are 80,000 servants and 72 wives, over which stands a dome decorated with pearls, aquamarine, and ruby, as wide as the distance from Al-Jabiyyah [a Damascus suburb] to Sana’a [Yemen]’.”

An Hamas spokesman correctly uses the word martyr (shahid) and not suicide bomber, since those who blow themselves up almost daily in Israel and those who died on September 11 were dying in the noblest of all causes, Jihad, which is an incumbent religious duty, established in the Quran and in the Traditions as a divine institution, and enjoined for the purpose of advancing Islam. While suicide is forbidden, martyrdom is everywhere praised, welcomed, and urged: “By the Being in Whose Hand is my life, I love that I should be killed in the way of Allah; then I should be brought back to life and be killed again in His way…”; “The Prophet said, ‘Nobody who enters Paradise will ever like to return to this world even if he were offered everything, except the martyr who will desire to return to this world and be killed 10 times for the sake of the great honour that has been bestowed upon him’.” [Sahih Muslim, chapters 781, 782, The Merit of Jihad and the Merit of Martyrdom.]

Modern apologists of Islam try to downplay the evident materialism and sexual implications of such descriptions, but, as the Encyclopaedia of Islam says, even orthodox Muslim theologians such as al Ghazali (died 1111 AD) and Al-Ash’ari (died 935 AD) have “admitted sensual pleasures into paradise”. The sensual pleasures are graphically elaborated by Al-Suyuti (died 1505 AD), Quranic commentator and polymath. He wrote: “Each time we sleep with a houri we find her virgin. Besides, the penis of the Elected never softens. The erection is eternal; the sensation that you feel each time you make love is utterly delicious and out of this world and were you to experience it in this world you would faint. Each chosen one [ie Muslim] will marry seventy [sic] houris, besides the women he married on earth, and all will have appetising vaginas.”

Homosexuality was and is widely practised in Islamic countries. To please the homosexuals among his followers he promised them pre-pubescent boys in Paradise. So after committing plunder, loot, rape and murder in this life, the followers of Islam get “rewarded” by untouched virginal youths who are fresh like pearls.

(QURAN 52:24): “And there will go round boy-servants of theirs, to serve them as if they were preserved pearls.”

(QURAN 76:19): “And round about them will (serve) boys of everlasting youth. If you see them, you would think them scattered pearls.”

It is common in Arabic poetry to glorify homosexuality, take their famous poet Abu Nuwas:

O the joy of sodomy!
So now be sodomites, you Arabs.
Turn not away from it–
therein is wondrous pleasure.
Take some coy lad with kiss-curls
twisting on his temple
and ride as he stands like some gazelle
standing to her mate.
A lad whom all can see girt with sword
and belt not like your whore who has
to go veiled.
Make for smooth-faced boys and do your
very best to mount them, for women are
the mounts of the devils

One of the reasons Nietzsche hated Christianity was that it “made something unclean out of sexuality”, whereas Islam, many would argue, was sex-positive. One cannot imagine any of the Church fathers writing ecstatically of heavenly sex as al-Suyuti did, with the possible exception of St Augustine before his conversion.

It seems then that this promise of sensual happiness and sexual bliss in paradise, not only is the motivator for the Islamic terrorists but it may even be a motivator for our secular evolutionists to join the rank of Islam.