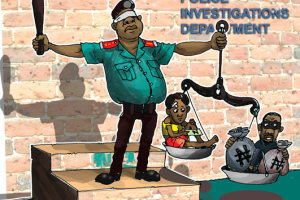 In Nyesom Wike’s testimony in a church after his ‘victory’ at the Supreme Court, the same ‘victory’ that was orchestrate in Mbaise, Dubai and Saudi Arabia. He said and I quote; “I thank the ex Governor, Dr. Peter Odili and the wife, Justice Mary Odili [a Justice of the Supreme Court], anywhere they asked me to go, I go, people they asked me see I see them. And the result is what we have here today.” After his ‘testimony’, everyone in the church clapped including the Pastor. This is how far our judiciary reduced to.

It’s an open secret that our judiciary is worse than armed robbers, and that is why you see some people boasting that no matter what they do, nothing will happen, because many of our SANs and judges have already sold their consciences for peanuts.

The clampdown on these corrupt element is long overdue, and I don’t mind how they get them arrested. I don’t mind if the Federal Government use Masquerades, Amadioha, Sango or OPC to arrest them, as long as the judiciary is cleansed. Our judges and lawyers have over years became ordained thieves and made lives miserable for the common man, so any means or actions that can at least reduce the rots in the judiciary to the barest minimum is welcome.

For the ‘Lawyers’ who said they shouldn’t have been arrested at night, and they shouldn’t have used the DSS, I don’t know if the Nigerian government should have used Choir Masters from different churches to arrest them or go to their houses with fanfare and put them on horses and bring them to DSS headquarters.