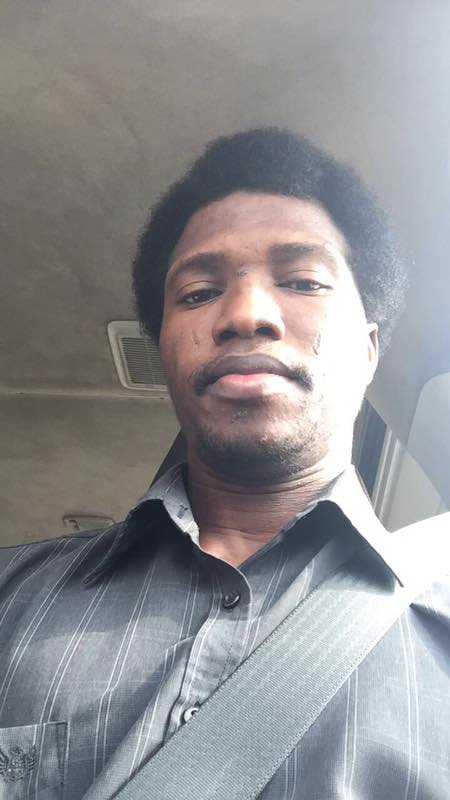 Oh Yes! I drink alcohol and I have been drinking it since I was a child. Oh yes! You’re not surprised because I’m not, my beautiful Iya Toyin had a brother (Uncle Ojo aka Olori Awo) who loves Ódéku and I’ve been kissing his glass of the dark pint since I was sitting in his laps. My mum had a restaurant and Beer was naturally a part of the plan for customers. I remember going the whole yard to buy crates of Beer to service my area uncles like Uncle Taiwo, Uncle Adedayo the wonderful husband of my Eunice aka Baba Iyanu (God Bless his beautiful soul, I miss him every day), Baba Gbemisola who can’t stop quoting Habakkuk to justify his drinking and promiscuous lifestyle and many more uncle’s that taught me life and showed me love beyond a bottle of the dark ale.

I can never forget Uncle Paul Aqua (I still miss him) and I’m still looking everywhere for his son Kodjo… he practically took his own life with addiction and recklessness when his wife “Auntie Toyin” died and I still can’t forgive him for loving us less than he loved her; (me, Kodjo, TBoy, Kemi, Doctor, Yemisi, Arewa) because he loved his wife too much. “I miss you uncle Paul and I love you eternally but you could have lived longer and see me become a man.” I got my Ghanaian identity from Uncle Paul, not his drinking habit and I still buy Donkunu, Banku and Kenke on the roadside anytime I’m anywhere it is sold. Palmwine was natural and alcohol was just a thing so I lived with it and drank. It was like Beer in a German’s blood stream. I was never a drunkard but I drink when it’s okay to drink a pint atleast.

I remember my beautiful Iya Toyin whacking her own Oluwatoyin silly for hanging out with LogoPee and getting drunk on Star (the small bottles of those years) for no sensible reason because alcohol wasn’t the trouble, getting drunk was it and I stayed away from getting drunk until I was about 21yrs old successfully. I got drunk for the first time in my life in 2007 and I’ll be another 30something years on earth by 17th of April, I am still very young. I have been practically running solo since I was a teenager so mama never got a chance to catch me drunk, me sef for chop reset slap, my life has always been on my terms and only God can judge me now.

This is not about getting drunk, it’s about surviving 4 ghastly motor accident and I wasn’t even a mile near alcohol when it all happened but people still blamed alcohol for it. The first I was a passenger and the next, I was riding a bicycle, I was driving a car just twice out of four times so you can imagine alcohols fault in the equation. Alcohol haff suffered in this world

On 10/03/2009, I had an accident that got my mouth and my right leg and I wasn’t even the driver so there was no way no man can blame me being under the influence of alcohol for the events that led to it. Sometimes in 2010, I was riding a bicycle in Hadejia, Jigawa State and a car came in hard from behind, knocking out a everything on its part, including a lone walker on the just walking on the road beside me and the world around was asking ” who is your God because we want to know Him/Her” and I couldn’t explain. I was actually on my way to NCCF fellowship at St. James Anglican Church on Emir Road when it happened, all I did was ride away from the scene, thanking God all the way. Then it was 29/12/2015 and armed robbers chased at Anthony in Lagos until a trailer came crashing in from behind us, I rose from the ruins and alcohol was in question but because I had witnesses, I wasn’t quizzed beyond the truth I already shared. I was fuel hunting to make it to my duty post the next morning as early as 6:00am.

The last one for this lifetime was sometimes in the early hours of the morning  of January 2017. I had two bottles of the dark ale as at 6:00pm at a colleague’s dad burial with my colleagues and office Dr. at my table, I even mixed the ale with malt, I drove my colleague attended with me back home from the event and about 1 or 2am, a trailer I was trying to overtake took the lanes from me in Maryland, Lagos and everybody felt/assumed alcohol was responsible for the accident. People that should be concern about me and thankful that I survived an accident took my mouth and consciousness away were busy trying to fix me in a jig in the name of being drunk? I got my smile and consciousness back just hours after and I said a whole lot of shit between, majorly protecting the ones I love from my woes. I was told I kept telling them not to call Oluseyi Asurf because he was sick and I was screaming Samson and Abiodun’s name (Abiodun boy and girl), I even gave them Sam’s number, I still don’t know how I did that with a broken subconscious mind and a broken bloody face. I hate how much I love these guys but I love them still.

Guys Abeg! Make we stop the joke! Alcohol is a bastard but that nigga is not responsible for my bad broken mouth and scared face. Let’s. Thank Eledunmare Adaniwaye that deemed it fine for me to still live for a million years first and not blame the blameless alcohol for what happened. Even if it was alcohol, I wasn’t force-fed, alcohol is innocent. My accidents were human errors that I had no control over and I find it scary that instead of us being human, we are busy looking for reasons to paint guilt. People are quick to hold the intangible responsible for mishaps, quick to blame the victim for his predicament and ready to point fingers when things go wrong instead of taking responsibility and helping to solve a problem or save a life.

I’m grateful for being alive and alcohol is not responsible for my actions or reactions dead or alive. Grace or Mercy or whichever is applicable kept me and I’m grateful. I’ve got sons and daughters in my loins and I’m looking forward to holding them with those who love my broken jaw, scarred face and beautiful smile. My lips are still 100% for kisses and a thousand % for love.

People have been asking, “how did you come out of this alive” but the answer is simple, I am alive, I came out and how I did it is none of my business. 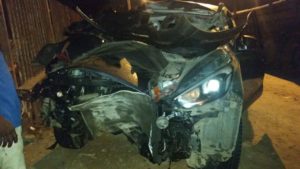 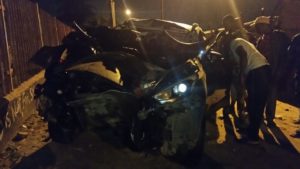