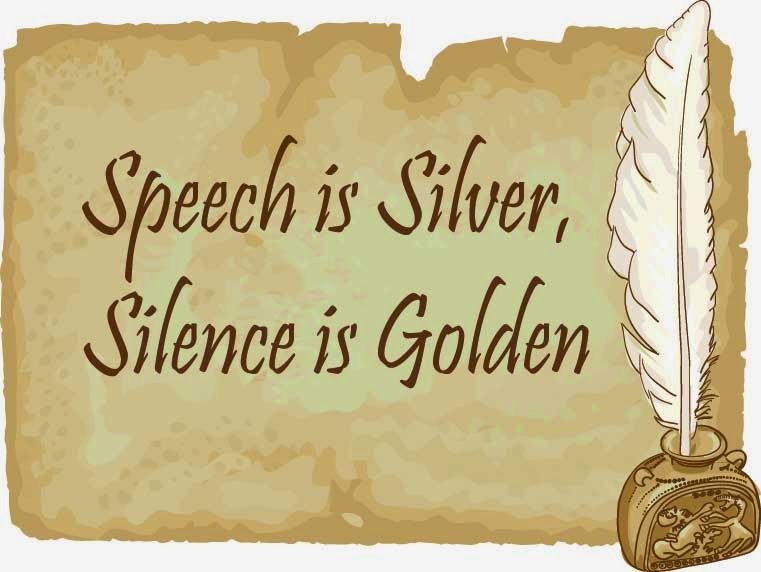 A word defined by action demanding no reaction. The Oxford Advanced Learner dictionary takes it as a noun, verb or exclamation, giving it the same definition in all contexts as“A complete lack of noise or sound”

I have always seen silence as just a word used in depicting quiet, unreachable or death, I have always had the feel it could also stand for peace, sanity or maybe concentration depending on the context of use e.t.c but a closer look gives me a whole new idea because I found out that silence is not just for the rational but also a trait of the irrational, I noticed that it is not just there in sanity but also very evident in insanity. Phlegm’s could be quiet but every other trait is not quiet but could practice silence. Silence is quite different from being quiet because there is still sound in quiet while silence is without, and neither does it depict peace because silence could be cold and deadly too, but believe me, silence is present in all.
It is a state of the mind, it is the place of thought, the only time when the human mind produces regular or even irregular thought patterns is when it is silent, and silence is the one true birthplace of thoughts. It is not a complete lack of noise or sound because there never will be a time there will be none and probably never a time to think, rather it is the time when the mind consciously or by reflex shields the entry/influx of noise or sound from its minute environment, while it process that which it as already received not just via the ears, but through all the five physical senses. Silence is beyond just sight or sound, it involves cutting out all vents of data absorption while creating a definite thought pattern. More reason why the deaf listen but not with their ears, they talk with making any sound at least not with their mouth, and they are always in dictionary silence, still they think! SILENCE is therefore not just the absence of noise or sound but a state of mind isolation that produces thoughts, while THINKING is the creative processing of sight, smell, sound etc assimilated by shutting out the entry of more sight, sound, smell etc during the creative process producing solutions to identified problems, or birthing new ideas.
To be silent is to think! Unconscious silence is reflex, happens in split second and could last longer producing unprecedented actions or definite reaction that satisfy its minute environment cognitively, while conscious silence takes a longer coordinated but not necessarily regulated duration and as such produces substantial results in thoughts and ideas, great imaginations and unusual actions or reactions that causes invention or creates solution to situation on a positively larger retrospect. I have discovered that the biggest imaginations and brightest ideas are brewed in silence, that the greatest people around me are great disciples of productive thinking which they duly achieved in silence. Although they are not as quiet as the monks underground the Basilica, they have produced more glittering ideas than the Solomon mines, and they live and speak with of ages that can only be found in silence. Even the thoughts I pen today I found in silence, not in the corner of my room but in a shower and I gave more life to it in a seemingly noisy café.
Think about it, compare your thought pattern and rate in silence to when you allow everything go loud deep within you, sit back and see how beautiful, creative and lofty your thoughts get when you mind is silent, feel how good you feel when you turn your ears off and turn your mind on. It’s like moving from a war zone into redemption, your thought pattern gets pretty defined and produces uncommon solution to common problems and uncommon results with seemingly common ideas and techniques that looks like everybody can do but no one ever did. Silence is not meditation, it involves the conscious and reflex processing of data while meditation is concentration on one to bring the extraordinaire out of it, and this requires both dictionary and real silence. Silence is consciously exploring the subconscious and it usually produces desirable unusual results that make you stand out and stand tall.
I have discovered that silence is a trait common to the rich, a quality of the wise and meditation is their bad habit. I have also discovered that the content of their silence are sights, sounds, smell etc assimilated through right listening, deliberate study and reading, they enrich their noise so that when they are in silence, they are caught up processing well patterned data. I have learnt that silence is a sign of HIS blessing; I practice it already and am never relenting. Who needs a better new year resolve when I can pick on silence, officially, I will be silent for the rest of this year and will be adding the bad habit of the wise to my resolution, and you can watch out for the end result. I will listen rightly and read productively in other to enhance the quality of the content of my silence, I will be meditating on all the tangible thoughts and ideas I receive in silence under the inspiration of HIS spirit so help me GOD.
Shhhhhh Silence! or you get silenced and become silent! Not the way things are, just the way I see things… thimk!
Continue reading