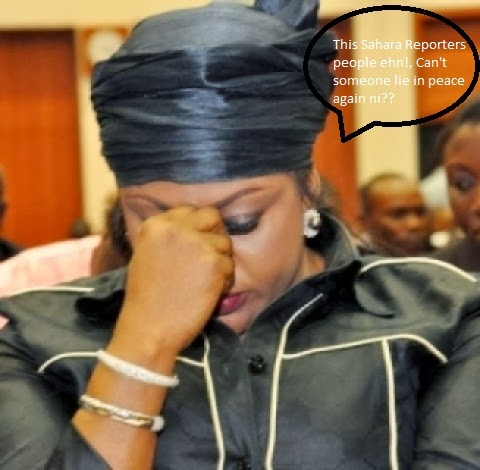 The notoriety of the Sahara Reporters to the government of Nigeria is gradually gaining more venom by the minute and need I say, “I am enjoying every minute of it”  even if Ms. Stella Oduah is not.
It all started with the uncovering of her bullet proof garage a few months ago.  The Sahara Reporters (SR) report had so much facts in it that the culprit “Oduah” needed not be taken to any court, and would have been hanged the next day in places like People’s Republic of China, Vietnam, South Korea, Taiwan or Singapore but thank God she’s a Nigerian living in Nigeria and dining with the corrupt kings of the land. The last time I checked, she’s still the Aviation Minister, using tax payers money to largesse, riding Limousines and Black “bullet proof” BMWs with a primary job description of maintaining the Presidential Air Fleet (PAF) of 10 aircrafts, while tax payers queue at the airports across the nation, waiting to board one of the forty four aircrafts manage by the eight airline companies in the country. Mind you, thirty five of this is owned by Arik (23) and AeroContractor (12), while the remaining nine is manage by six companies. The ratio seems perfect PAF 10 aircraft : 1 President while the whole of Nigeria minus Governors, Politicians and Billionaires who can afford Private Jets (PJ) gives us, 44 aircraft : 159 Million Nigerians, and sometimes those that can’t afford the PJ chattered this planes, making the queue longer and the flight delays, even worst. What a friend we have in Stella, I heard she’s making the queuing area more comfortable, buying chairs and installing air conditioners while the nation prides in the lack of a National Carrier. “Yèyé!”.
In an attempt to keep the honourable in her ministerial title, amidst the shame of squandering and embezzling of national earning from sales of Nigerian resources (crude oil, gas, water, air and even slaves) and tax payers money on luxury on luxury and selfish pursuit of glamour, she faked her own death in an attempt to justify her inhumanness and flagrant waste of unallocated resources.
Sometimes in November 2013, The FCT Police Public Relations Officer, Altienne Daniel, said…

“The incident was reported to us on Monday at exactly 5.45pm and we are subjecting the metallic object we recovered from the car to ballistic test. I can’t say whether the object is a bullet or not. So I can’t give you any information on it for now.”

How do you describe a situation where men of the Nigerian police saw a metallic object where the Aviation Minister Stella Oduah claimed her car was shot at three times, but they don’t think what they saw is a bullet? What they saw was one metal object, her claims were three shots, the BMW must have swallowed up the shells. Even my late grandma that lived her youths in the years of dane-guns knows what a bullet shell looks like in her grave. Imagine one single Stella, exhausted her vehicular allocations on Limousines instead of utility trucks and buses, borrowed money from a bank illegally in the name of the Ministry of Aviation to the tune of N650m plus interest, inflated the value of the BMWs and even gave a false profile of the vehicles she purchased and hinged the servicing of the loan on the account of the ministry and SR was there, throwing out all the details of the scheme without fear.
“This SR people sef, make una leave her alone ooo!, you can remove the honourable but she will always be a ndigbo princess from Akili-Ozizor, Amambra state.”
Read the full report here>> http://saharareporters.com/news-page/police-abuja-say-they-are-not-sure-gunmen-attacked-stella-oduah%E2%80%99s-car
As if what SR uncovered already was not enough, they reported that claims in Oduah’s profile on the Federal Ministry of Aviation’s website that Stella obtained a Master’s degree in Business Administration from St. Paul’s College in Lawrenceville, Virginia in 1982, is false. This allegation was confirmed by authorities at the college. The President of the institution, Pete Stith, confirmed that the college had not at any time offered any graduate programme of any kind, and is not sure if indeed Oduah, bagged a first degree in Accounting from the institution. I wasn’t surprised because there was a time one of her colleagues lied about undergoing the compulsory NYSC programme, and I can still hear the Toronto Tinubu bells ringing, but I was amazed at the speed with which she confirmed the truth in the story.
On the next day of the allegation, she was quick to remove the St. Paul’s College completely as her school on Facebook, and similar modifications were made to her Wikipedia, leaving just the lies about studying in the USA, and also removing links to interviews she personally granted where she admitted obtaining degrees from St. Pauls’ College. Even in the worst of nations, any public office holder with so much skeleton in her front door will automatically resign or have her appointment withdrawn by the government, pending proper investigation and confirmation of the allegations, and perhaps prosecution, but here she’s still addressed as a “Honourable Minister” and I am almost sure there will be no such actions under the GEJ administration, even more odious crimes with glaring evidence of corruption has been swept under the Aso Rock in recent times. I remember Farouq negotiating with Otedola recently, Deziani must be somewhere chilling and the last time I checked, there is absolutely nothing sure about the SURE-P, ask Okonjo Iweala, she will tell you it is the fault of the cabal, while Sanusi will be quick to tell you, it’s Islamic banking or the removal of the face of Herbert Macaulay from the one Naira coin that will save Nigeria. I even heard on radio that laws are being enacted against reporting of corruption online and through social media platforms. SR beware!
Now that we are more than sure that our divorcee Princess Stella Oduah, “the former minister of aviation” (prophesy) is a complete fraud, I have one more assignment for SR to complete this stellar series. We are sure she didn’t attend St. Paul College, let alone graduate with any degree. Her father Igwe D.O Oduah, the Igwe of Akili-Ozizor in Ogbaru Local Government Area of Anambra State will like to know what her daughter was doing in the USA between 1978-1983. In those years of old, even the Igwe’s daughter was sent to school abroad with community and the elders of the community must have celebrate her return, only to find out thirty years later that they celebrated a fraud. I don’t know how SR will dig the truth up like they’ve always done, maybe they will have to travel back in time or do something more interesting to find out what happen, where she was and where in “Oluwole” she got the certificates she presented from.
“Dear Sahara Reporter. The Igwe and the community will like to know, what Stella was doing in Obodo-Oyinbo for five years. The Igwe as spoken”— *In Pete Edochie’s  voice*
iThink, iWrite and iActOnIt
Blog: www.babaolowo.blogspot.com
Twitter: @enyola
Continue reading