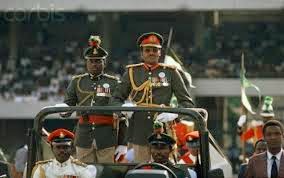 I read Buhari’s comment this morning and I almost laughed. He said ..

“Our country has gone through several rough patches, but never before have I seen a Nigerian President declare war on his own country as we are seeing now…”

Grandpa Buhari, you can lie ooo! What about the wars you declared on innocent Nigerians as a military ruler… Your tolerance for opposition was superb then I assume, so holistic that you jailed so many people without fair trial..
As an oligarch and military ruler, you didn’t believe in equality before the law. Just to mention a few of the things you did that I am sure GEJ hasn’t even scratched the surface…
1. You jailed Lateef Jakande, Jim Nwobodo, Ambrose Ali, Pa Adekunle Ajasin, Chief Ayo Ojewumi on cases that had no foundation… That one is not war on Nigeria and Nigerians right?
2. You protected Awwal Ibrahim, the then Niger State governor, who was arrested in Heathrow Airport in London with 14 million pounds sterling and several millions of Naira and dollars by putting him under house arrest. I wonder why you frown at GEJ for protecting Ijaw thieves?
3. You placed Shehu Kangiwa, Sokoto State Governor who conducted and supervised the famous Bakolori Massacre of poor peasant farmers whose land were appropriated without compensation under house arrest instead of the guillotine like you always do with people that did nothing.
4. Ayo Ojewumi and Prof. Ambrose Alli came out of your prison camps blind as a result of imprisonment on false charges… Even Mandela still had his eyes after decades of imprisonment, what did you inject in their system… Love abi?
5. You publicly executed three innocent Nigerians by enacting an overnight law that made legality illegal for your own good pleasure. Lawal Ojuolape (30), Bernard Ogedengbe (29) and Bartholomew Owoh (26). were killed because you upgraded the law to suit your blood thirst.
6. You jailed Ndukar Irabor and Tunde Thompson of the Guardian on stories that were true under Decree 4. You told Nigerian journalists then that “it did not matter whether the story reported was true or not, if my regime did not like it, the writer would go to jail.”
7. You Jailed Pa Adekunle Ajasin… you might want to tell us why?
8. You created emergency rule just because you wanted to jailed Fela Anikulapo -Kuti (Abami Eda) out of your way on trumped up charges. The judge later confessed you ordered him to do so..with an apology to Abami Eda. If Fela were alive today, he will win you in any election with or without rigging, you should bury your head in shame and stop calling yourself “elder statesman” you are nothing near a statesman.. you be “enemy of state”.
9. You publicly said ” I decided to deal with this Fela problem once and for all.” was Fela Kuti the voice of truth and freedom a problem? You were and still a problem.. hundreds of thousands are dead in your name..
10. As a smuggler, you supervised the smuggling of 53 suitcases filled with cash through the MMA against the protests of General Tunde Idiagbon and ironically, Abubakar Atiku, the then Director General of the Customs. Your chief smuggler then was your ADC, Col. Mustapha Jokolo.
11. Buhari, the unholy mallam, you placed President Shagari under house arrest inside a palatial mansion in Ikoyi while you locked up Shagari’s Vice, Alex Ekwueme in Kirikiri Prison… so much for being a true Nigerian with no ethnic inclination… Sir Ahmadu Bello will be very proud of you for upholding the dumb ass Dan Fodio estate.
12. Grandpa, in 1984, you rented assassins in the UK to drugg and crate/box your fugitive political friend, former minister of transportation Umaru Dikko in an attempt to forcefully smuggle him back into Nigeria as a diplomatic baggage to come and face charges of corruption in your own court that is governed by your personal rules. What manner of man will put a human being in a crate like a bird from the Amazons, to be shipped illegally because you are almighty Buhari when you could have tabled a legal diplomatic request for him to be repatriated. Thank God the British authorities opened the box. Imagine an anti-corruption crusader that knows where to find and hire assassins abroad, imagine how many he keeps on home soil. Anti-corruption my foot, abeg make the old cow go siddon, we don’t need the likes of him or GEJ, they are cousins, no value for human lives.
13. Worst of all, you subverted the will of the people that night in 1983 when you disbanded democracy with force… I’ve heard the lame claim of bloodless coup, but you’ve shed more blood in public view than any ruler Nigeria has seen..more than even the stone-hearted Abacha, you are simply a lying, heartless, northern Islamist.

For those that paint Buhari in shining anti-corrupton light, GEJ is a lot like him, power drunk bigots that want to keep power at all cost, even if the people they want to govern die miserable deaths in the process… If GMB is still a saint, maybe GEJ is right about stealing not being a corrupt practice… Killing is just murder not corruption, stealing is just robbery not corruption… I choose the truth though…

Go tell it on the mountain, GMD is not a general of the people! He’s a general of his own power drunk ambition, his last crumb of honour was crushed when endorsed Mohammed Abacha for money, he should be dreaded… He’s the only man that killed more people in the name of being the president that Abacha so I see where they connect. The only man more power driven than him in Nigeria right now is GEJ, his own crusade is we need a second term no matter what… They are both rouges and liars… they own thesame ambition and share thesame lies… 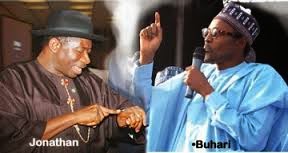 If you believe anything they say, you are sleeping on a bicycle… “Walahi oti jonatan”