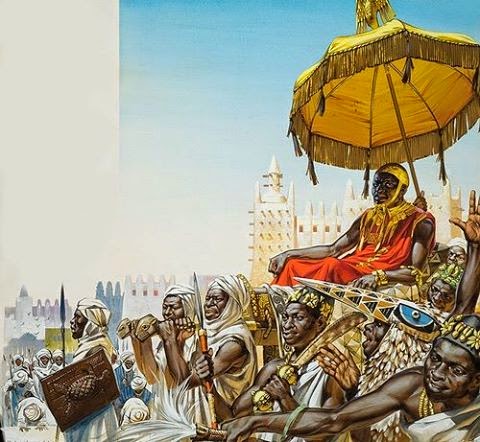 Mansa Musa, was the emperor of the 14th century Mali Empire which covered modern day Mali, Senegal, Gambia, and Guinea.
At the time of his death in 1331, Mansa Musa was worth the equivalent of 400 billion dollars. At that time Mali Empire was producing more than half the world’s supply of salt and gold.
When Mansa Musa went on a pilgrimage to Mecca in 1324, he carried so much gold, and spent them so lavishly that the price of gold fell for ten years. 60 000 people accompanied him.
He founded the library of Timbuktu, and the famous manuscripts of Timbuktu which cover all areas of world knowledge were written during his reign.
Witnesses of the greatness of the Mali empire came from all part of the world. “Sergio Domian, an Italian art and architecture scholar, wrote the following about this period: ‘Thus was laid the foundation of an urban civilisation. At the height of its power, Mali had at least 400 cities, and the interior of the Niger Delta was very densely populated.’
The Malian city of Timbuktu had a 14th century population of 115,000 – 5 times larger than mediaeval London.
National Geographic recently described Timbuktu as the Paris of the mediaeval world, on account of its intellectual culture. According to Professor Henry Louis Gates, 25,000 university students studied there.
Many old West African families have private library collections that go back hundreds of years. The Mauritanian cities of Chinguetti and Oudane have a total of 3,450 hand written mediaeval books. There may be another 6,000 books still surviving in the other city of Walata. Some date back to the 8th century AD. There are 11,000 books in private collections in Niger.
Finally, in Timbuktu, Mali, there are about 700,000 surviving books. They are written in Mande, Suqi, Fulani, Timbuctu, and Sudani. The contents of the manuscripts include math, medicine, poetry, law and astronomy. This work was the first encyclopedia in the 14th century before the Europeans got the idea later in the 18th century, 4 centuries later.
A collection of one thousand six hundred books was considered a small library for a West African scholar of the 16th century. Professor Ahmed Baba of Timbuktu is recorded as saying that he had the smallest library of any of his friends – he had only 1600 volumes.
Concerning these old manuscripts, Michael Palin, in his TV series Sahara, said the imam of Timbuktu “has a collection of scientific texts that clearly show the planets circling the sun. They date back hundreds of years . . . Its convincing evidence that the scholars of Timbuktu knew a lot more than their counterparts in Europe. In the fifteenth century in Timbuktu the mathematicians knew about the rotation of the planets, knew about the details of the eclipse, they knew things which we had to wait for 150 almost 200 years to know in Europe when Galileo and Copernicus came up with these same calculations and were given a very hard time for it.
The old Malian capital of Niani had a 14th century building called the Hall of Audience. It was an surmounted by a dome, adorned with arabesques of striking colours. The windows of an upper floor were plated with wood and framed in silver; those of a lower floor were plated with wood, framed in gold.
Malian sailors got to America in 1311 AD, 181 years before Columbus. An Egyptian scholar, Ibn Fadl Al-Umari, published on this sometime around 1342. In the tenth chapter of his book, there is an account of two large maritime voyages ordered by the predecessor of Mansa Musa, a king who inherited the Malian throne in 1312. This mariner king is not named by Al-Umari, but modern writers identify him as Mansa Abubakari II.” Excerpt from Robin Walker’s book, ‘WHEN WE RULED’
Those event were happening at the same period when Europe as a continent was plunged into the Dark Age, ravaged by plague and famine, its people killing one another for religious and ethnic reasons.
-SiliconAfrica.
Credit: Abiyamo
Continue reading