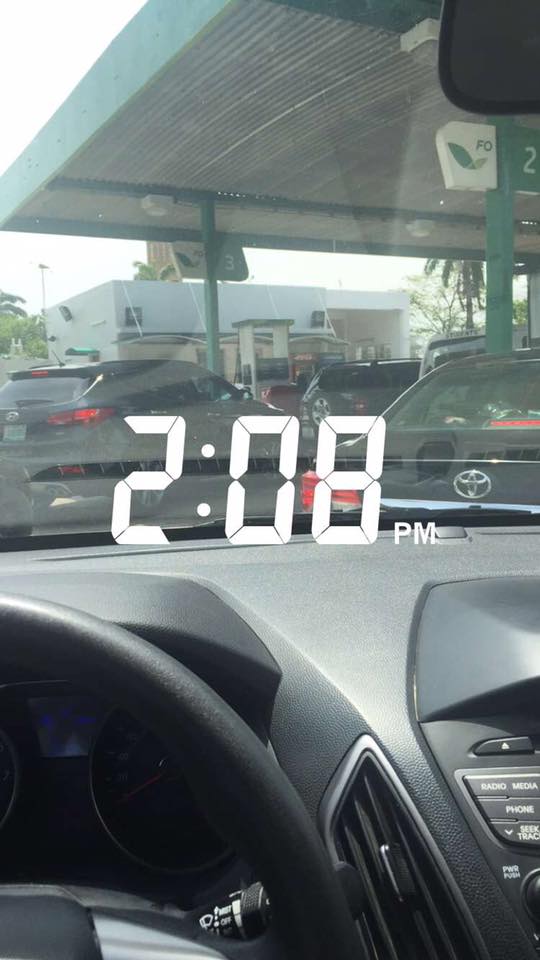 I somehow made it to the Forte Oil Gas Station in UNILAG to make my intentions known to the management with respect to being shortchanged yesterday when I bought petrol at the station. A queue was still in place but since I had no intention to buy fuel this time, I drove in and parked at a very distinct spot so no one will think I’m trying to jump the queue.

I walked up to the office like someone that was there to buy Coca Cola. I greeted the man at the door reading something that was obviously uninteresting and he looked up and replied. I noticed he was about to go back to the book so I spoke up “I’m here to see the manager”, he seized me up and said ” he’s not around, why do you want to see him?” I understood his expression because I was looking like a 21 years young (forever young) job seeker. I changed the pattern ” I’m Abidemi, a customer and I’m here to see the manager. I have a complaint, if he’s not around, can I please have his phone number”. The change in the tone of my voice sent the message somehow and so did his response, he simply beckoned me to go in and meet the man sitting at a table inside. I walked into the manager’s office, re-introduced myself and explained how I was sold oxygen ask 4K worth of petrol…

Instead of acting surprised or defensive, he was calm and simply asked me to identify the particular pump… Then he asked if I was sure the pump was rubbed before they started selling and I confirmed that I saw the count start from zero. Then he went back and forth defending the integrity of their pumps, the volatility of the location of the station and the capacity of some professors to close down the station with just a call if a compromise was suspected before going back to what could have happened.

In his defence, he reaffirmed that the pumps are not compromised but the attendant could have pulled a fast one on me. He also suggested that my car gauge could be giving a wrong reading but I insisted it wasn’t. He offered to go see the level and I indulged him. I started the engine and the stupid pump went to full tank mode😳 (alakoba), he was about to justify his claim but I insisted that it was impossible for my car to even take 50ltrs with the level of fuel I had left in it… then the gauge automatically dropped the first two bars… I gave him the evil grin like Abija in “Koto Orun” and pointed at the gauge😬, he smiled back and confirmed that apparently, what I got was oxygen and not petrol but affirmed it wasn’t the pump.

After we compared all possibilities, he agreed that it is only possible that the attendant had pulled a fast one on me. He said if he’d sold to a bike or a smaller quantity to another vehicle, there’s the possibility of such. He advised that I should always make sure that they rub the meter or have them enter the amount of fuel I want on the digital panel so that the pump itself handles the situation because it is very easy for them to pretend they rubbed the meter in their attempt to rob unsuspecting customer. He apologized for the situation and promised to investigate and identify the attendant that did such a thing as well as caution the others because if it was one of the staff or professors that had that experience, it could have spelt trouble for even him. He thanked me for coming to report and gave me his card and assurance that he will look into it. He insisted that I call him the next time I’m there to buy fuel so he can proof that the meters are in perfect measures and even promised to call me the next time they have fuel which will be tomorrow. I felt like breaking his head for suggesting that I should come the next day after they just robbed me off 4K but I refrained from such because he showed promises of really dealing with the situation. It was evident that he knew what happened, perhaps a similar situation had been reported earlier in the day and the culprit identified already.

My consolation in all of it is that I’m sure that actions will be taken to curtail the yahoo yahoo they are doing (whoever is involved) because even though the manager was calm, there was fear in his reaction (body language), probably because I told him I can spend 100k to recover my stolen N100.

It is important that we always speak up and stand for what is right, demand that which is good and not ignore everything in the name of going elsewhere to get it better. We can make the bad become good only if we speak up and stand up to act against what is going wrong within our sphere no matter how closed or small it is.

I’ll do another round at the Forte Oil in UNILAG when fuel scarcity is gone, I won’t call Mr. Abiodun before I do but will definitely call him after to thank him for fixing the problem or inform him that the storm called DPR is coming to lock up the station.

Be The Change You Want To See