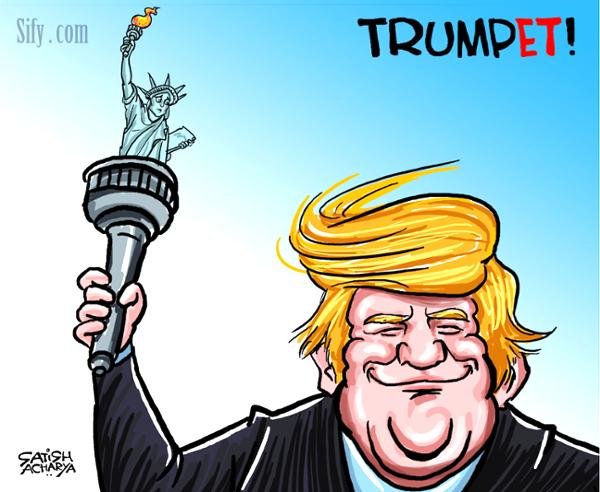 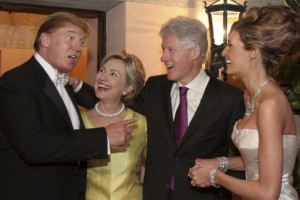 A few weeks ago, I did had a critical internal analysis after some soft political wit with my friend and I rose from it and wrote on my Facebook wall that “I’ll love to have a Trump victory” for reasons that were obvious and this morning, I could only giggle and laugh as I watched the Aljeezera projected election results with a bulging tired eye as Donald Trump’s walked his way to victory with a very convincing lead from the beginning of the race to the end, while Hillary can’t even seem to Clint a bite of it.

I watched hundreds of disappointed Clinton voters interviewed and each time, they all agreed that they did voted her not because she was deserving, but more because she’s someone they perceived as the lesser of two evils. A few others were quick to even label her as the bigger evil, a candidate of the establishment which they dreaded, claiming that they only voted her because they perceive Trump is a racist, misogynist and fraudulent but HONEST American who is not riding the wave of the establishment against all odds. The private email server misdemeanor was considered a great negativity and by the time the votes tilted towards Trump, everyone interviewed was blaming the Mrs. for creating the problem in the first place. For all these voters, Clinton was only a consideration and not a choice because if they were to choose, they will rather not vote at all.

I also saw a few hundred interviewed from Trump’s camp and their reaction was totally different. They considered the accusations leveled against Trump as the normal everyday stand of an average American. The derogatory gender remarks he made about women was consider normal because as they see it, an average male (rich or poor) only sees a woman as a tool of pleasure and Trump, a billionaire who can afford to buy any grade of pleasure shouldn’t be a different specie even if it was wrong, all his slandering was termed mere “innuendos”. Yes! Trump is a baddass but to them, he’s the only bad person worth voting for, Clinton was not even second option and not voting was not on their agenda, it was Trump and Trump alone. They don’t care whether Trump had experience, policy map or any idea about the system, whatever he was was bad enough for the good they desired. He was considered the Republican Obama, a man without any root in the establishment, an outcast even in his own party and a force that has moved with the people and totally out of the grip of the political class that has laid siege to their party for too long. For them, he is a business man who has made the conscious move to resonate with the direct need of the people, and they were almost sure even in their naivety that he will deliver on all his promises even when in the real sense of it, he has made no promises but only said the things they needed to hear.

A close comparison of this reactions shows that 90% of Hillary Clinton’s voters were voting AGAINST Trump and not for Hillary but a good 100% of Donald Trump’s supporters were voting FOR Donald and AGAINST Clinton which makes Trump a deadlier opposition with more committed and decided voters. The mathematics of this is that there is little or no possibility of Trump voters changing their mind to vote for Clinton or the other candidates, but there is even a higher possibility of Clinton’s supporters changing their mind at the poll to go for Trump because both candidates are considered evil and their perspective can be easily swayed. This was reflected in the voting patter and result so far. Trump supporters were definite, decided voters while Clinton’s voters are more in the category of emotional undecided lots, with the exemption of the black communities who see Trump as a racist and statistically, they sum up to only a miniscule percentage of the American population. For the Democrats and a few Americas, Clinton is the lesser of two evils but for a few Republican and the larger white populace of America, Trump is the better evil. A good percentage of the Democrat influenced voters and Bernie Sanders supporters chose not to vote at all while those who did obviously did what must be done.

The problem of this election is so far away from the sexist, racist, Islamophobia driven identity of the man of the moment, it is more shrouded in the identity of the woman he is contesting against. While all the crimes of Trump are out there in the open for all to brutalize and criticize him with, the sins of Clinton as consistently be covered in veils and blankets no matter how sinister and devastating they are. While Trump the racist was busy campaigning about reviving the Mines and creating jobs and a better life for the hundreds of Americans miners that has been literarily abandoned for years, crooked Hillary was busy rambling on her gender as an entitlement mantra and with clear foreign policies that will keep America an imperial power without considering the health and wealth of the American people a priority as Trump did even though Trump had no clear path to how to make anything work, he kept telling the white communities (the majorities) what they wanted to hear to a nostalgia evoking dais.

To compare the campaign of the two candidates on an intellectual level is to compare chalk and cheese. Apparently, Hillary was the better with intellectual prowess, deep knowledge of governance with clear foreign, economic and political policies; crowned with her “a woman deserves the Whitehouse” entitlement mentality, while Donald was the business man who was only interested the business he’s set out to do using whatever it takes.  The three-prong truth is that a smooth sounding campaign never wins the elections, only the man that can connect with the real voters and sway takes the win away. Take Obama for example, beyond his smooth demeanor and pristine oratory skills, his ability to connect physically with the people won the heart of many, his simple identity and capacity to resonate with the desire of the people placed him on the ballot and in the heart of the people beyond the colour of his skin, this same method is what has worked for Trump. He’s lost in the media and on the podium, but he has been able to drive emotions and has successfully won on the street as against the cool, calm and collected but cold Hillary who has only shown capacity to rule without any personal capacity to resonate with the desire and needs of the average American. I know I might be wrong because I have been watching from afar, but all the campaign drives that elicited emotions during the Clinton campaign emanated from either Barrack or Michelle Obama throughout the Democrats campaign trail, everything from Hillary was on the book and cold, the only thing he did otherwise was try to paint Trump the demon we already knew he was. I remember a young voter commented that he voted Barack Obama in the previous election just because he came to his college and played basketball with his team, that connection works like magic, way beyond the book balance of facts that have no immediate effect on the people.

As far as I know and for as long as racial identification and classification exists, America will remain a white identity scented and spiced with black lives that really do matter but for long, she will remain a nation whose leadership will be determined by the white majority. Donald Trump is not the American problem in itself, he is only a reflection of the deep rooted average American personality, desire and problem and he’s more of the model of the “American Dream” that preaches that you can become anything you want to be (either by hook or crook) in America and that is why he has won the election against all predictions, assumptions and odds. One major truth is that just like it is in Nigeria, the real voters are not the plenty of us ranting on Twitter and exchanging bants on Facebook, even if they are there, they are not swayed by the music, they are moved by… and another major reason for the Trump victory is that an average white folk is a conservative who is still sold to the religious injunction of “man is the head”, so it was easy allowing the male evil to prevail over the female because their God will want it that way too… Halleluja!

I also heard a Nigerian prophet had predicted or should I use the spiritual term “PROPHESIED” that he saw a woman winning the election (which is a possibility), I am sure he was smart enough not to put a name, place or date on the prophesy and we should all remember it is a prophesy, it might take another thousand years to come to pass.  I think the prophesy of “The Simpsons” works better in this situation, for quite a while now, and they seem to have a more profound prophesy machine, sure enough to put a name on it and a futuristic date which seems to have taken a shift backward into the reality we all about to deal with now. Yes! The Simpsons had a Trump President for some episodes and during his time in those episodes, America was “Stronger Together” and not “Great Again” so we can only patiently wait and hope that every other thing in those episodes of Simpsons was mere for the laughs. 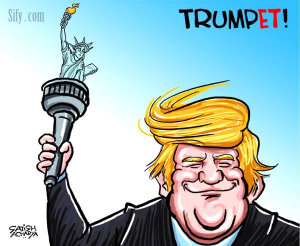 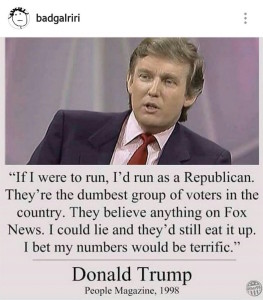 Since it Is possible for Trump so say whatever he feels like, whenever it comes to his mind and perhaps deny it later without blinking, I choose to believe a rumour that in 1998 Donald Trump said…

“If I were to run, I’d run as a Republican. They are the dumbest group of voters in the country. They believe anything on Fox News. I could lie and they’d still eat it up. I bet my numbers will be terrific.”

… although the statement has already been proven to be a fake, in the end Donald Trump is to America what Ayo Fayose is to Ekiti. It is rather disheartening that the best man that can be the President in a so-called developed and civilized society like the United States of America is Ogbeni Donald Trump. Indeed, America has degenerated to its lowest ebb yet again and indeed need to be great again. I am glad America finally got their own Fayose right at the top of everything they represent. It is the American dream!